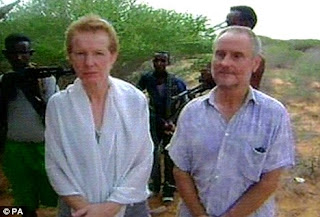 NAIROBI, Kenya - Somalia's government on Friday called for the release of a British couple being held in the country ahead of the one-year anniversary of their capture.Minister of Information Abdirahman Omar Osman said the continued captivity of Paul and Rachel Chandler is "inhuman and un-Islamic.""Saturday marks one year since the deplorable capture and kidnap of Paul and Rachel Chandler by Somali pirates," he said in a statement. "That situation brings terrible shame to our nation with every day that it continues. The responsibility for this outrage lies with the criminals who disrupt this strategic shipping line around our waters."Osman also called on the international community to give more help to the struggling government, which he said is incapable of fighting piracy on its own off the coast of the lawless East African country.The retired British couple have been in pirate custody since their yacht was hijacked off the Seychelles on Oct. 23 last year. Somalia has been a failed state for nearly 20 years, and piracy is one of few opportunities to make money. Another popular criminal venture is kidnapping for ransom.Separately, a British aid worker who was released by Somali captors two days ago said Friday that he may go back to work in Somalia.Frans Barnard, an aid worker with Save the Children, said his decision to return to Somalia, where he was held for nearly a week by kidnappers, would depend on discussions with his wife.Barnard said his captors were teens, who because of lack of opportunities and easy access to weapons, saw kidnapping as a way of raising funds.Barnard said that although there were moments of tension, he was generally treated well."Overall I would say without hesitation is that they viewed me as a commodity, and as a commodity the more unscathed I was, the more undamaged I was, the better for them as well," Barnard said.Masked gunmen abducted the Briton and a Somali co-worker on Oct. 14 from a compound in the town of Adado, near Ethiopia's border. The Somali was released earlier. A spokeswoman for Save the Children had said Barnard was released after the intervention of Somali clan elders.Kidnapping for ransom is common in Somalia. Hostages are rarely hurt and people are usually freed after a ransom is paid.