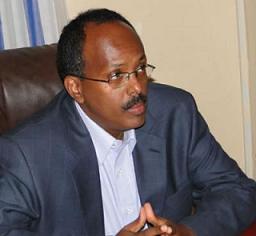 Mogadishu, Somalia (TF.SF) – Hundreds of people have gathered in Mogadishu on Saturday for a demonstration organized by the Transitional Federal Government of Somalia to show support to Somalia’s new prime minister.
“Your Excellency Prime Minister, injustice made the country and its people in this abominable situation, you are needed justice right now” Moahamoud Ahmed Nur, TFG’s Mayor of Mogadishu, told the demonstrators.
Some demonstrators in Mogadishu were waving the images of Sharif Sheikh Ahmed, the president of Somalia and the newly elected Prime Minister Mohamed Abdullahi Mohamed. Others held placards proclaiming victory for the new premier.
Some members of the parliament, military and police officials from the transitional government were spotted in attendance at the demonstration. 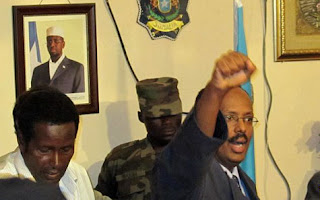 God Abdalle Magen, Somali MP spoke at the rally calling on members of Somalia’s transitional parliament to shore up Mohamed Abdulahi “Farmajo” newly selected prime minister.
On Thursday in Mogadishu Sharif Sheikh Ahmed, Somalia’s embattled president appointed Somali-American, Mohammed Abdullahi Mohammed “Farmajo” as the new prime minister in the transitional federal government. He will replace Omar Abdi rashed Ali Sharma’arke, the resigned Prime Minister.
The new Premier said his priority will be restoring peace and security in Somalia, indicating he will work with both the president and the Somali Parliament.
Posted by Siad barre at 5:11 PM