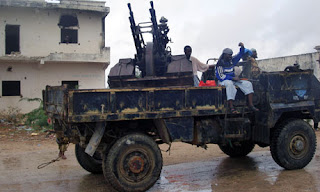 Islamic gunmen patrol in Mogadishu, Somalia. A Briton working for Save the Children has been kidnapped in the country. Photograph: AFP/Getty Images

A British security consultant working for a UK charity was kidnapped last night by gunmen in a Somali town near the Ethiopian border.He had been contracted by Save the Children to assess whether it was safe for the group to resume aid operations in the area. His Somali fixer was also kidnapped, but was reportedly released today.They were seized in the town of Adado, which is under the control of clan bosses. It is also used as a base by piracy kingpins whose gangs have netted tens of millions of dollars in ransoms from hijacking ships.Ali Sayid Omar, the owner of the guesthouse where the pair were staying, told the Guardian that militia groups were pursuing the kidnappers, who are believed to be moving east towards the coast."They are trying to find them before they get too far," he said.The Briton, who also has Zimbabwean nationality, had worked as a security consultant for aid groups operating in Somalia since 2007. Though based in Nairobi, Kenya, he had spent considerable time in Somalia and was extremely knowledgeable about the country and its risks.The fixer, Bashir Yusuf Osman, owns a hotel in Mogadishu, and is a well-known figure in the capital.In a statement, Save the Children said the pair had been "assessing the feasibility of starting up a humanitarian programme to help malnourished and sick children and their families in the area"."We are extremely concerned about the welfare of those being held and urgently call upon whoever is holding them captive to release them unconditionally," it said.The Foreign Office said it was aware of the reports and was urgently investigating them.Adado, the capital of the Himan and Heeb region, is considered safer for foreigners than some other parts of the country, where hardline Islamist movements that claim allegiance to al-Qaida are in charge, or are fighting government troops.But in a sign of the volatility in the country, the town changed hands earlier today. Fighters from the Ahlu Sunna Waljama'a militia, a Sufi group opposed to the Islamist hardliners, took control after heavy fighting. The operation was not linked to the abduction, but has complicated rescue efforts.Save the Children has been working in Somalia for more than 40 years on improving access to food, healthcare and education.
The charity is largely based in the central Hiran region, Karkaar in the north-east, and the Togdheer region of Somaliland. Its work has been limited by the security situation but it began pooling resources this year with two other branches of the International Save the Children Alliance – Denmark and Finland – to become a single presence in the country.Thousands of African Union peacekeeping troops are in Somalia, which has been without a functioning government for nearly 20 years, to support the weak interim administration. Hardline militants control much of Mogadishu, and large chunks of the country's south and central regions.
The country's transitional federal government has been beset by internal divisions. President Sheikh Sharif Ahmed yesterday named a US-educated former diplomat as prime minister in an attempt to regain the initiative from Islamist insurgents.Mohamed Abdullahi Mohamed, 49, will replace Omar Abdirashid Sharmake, who quit last month, a casualty of the government's failure to defeat an insurgency that has killed tens of thousands of civilians since the start of 2007. Guardian News
Posted by Unknown at 4:25 PM