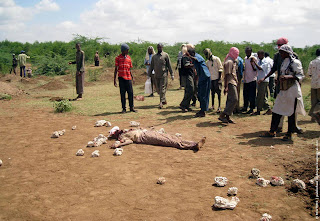 Sharia law influences the legal codes of most Muslim countries one way or another
ABU DHABI // A man has the right to discipline his wife and children provided he does not leave physical marks, the Federal Supreme Court has ruled.
The judgment was made in the case of a man who slapped and kicked his daughter and slapped his wife.
The wife suffered injuries to her lower lip and teeth, and the daughter had bruises on her right hand and right knee. The court ruled that the bruises were evidence that the father had abused his Sharia right.
According to Islamic law, a man has the "right to discipline" his wife and children, which can include beating them after he has exhausted two other options: admonition and then abstaining from sleeping with his wife. Although scholars differ in their definition of "beating", all agree it must not be severe.
In the case of the wife, it was the degree of severity that put the man in breach of the law. The daughter, however, was 23, and therefore too old to be disciplined by her father.
He claimed he did not mean to harm either of them, and had hit his wife by mistake while trying to discipline his daughter.
Sharjah Court of First Instance fined the father Dh500 for abuse. The decision was upheld by the Sharjah Court of Appeals on February 14. He appealed against the verdict at the Federal Supreme Court.
"Although the [law] permits the husband to use his right [to discipline], he has to abide by the limits of this right," wrote Chief Justice Falah al Hajeri in a ruling issued this month and released in a court document yesterday.
"If the husband abuses this right to discipline, he cannot be exempted from punishment."
The court also ruled that a father does not have the right to beat his children after they become adults. In Sharia, reaching the age of puberty is evidence of adulthood.
"He is not allowed, according to Sharia, to beat his daughter, who is 23 years old," wrote Chief Justice al Hajeri.
Jihad Hashim Brown, the head of research at Tabah Foundation, said: "It's unlawful in Sharia - if taken in its entirety - to injure one's wife. It's unlawful to insult the dignity of one's wife.
"That is if we look at the tradition as a whole: the Quran, the hadith and writings of Islamic jurists."
He said beating one's wife was in conflict with "clear and concise" Islamic texts, which encourage Muslims to treat their wives in "love and kindness".
He said a Quranic verse might appear to allow certain things but if the verse was not "clear and concise", it should not enter courts of law.
"The vast majority of scholars overwhelmingly agree it is forbidden to injure or insult the dignity of one's wife," Mr Brown said. "If there is no clear text, then the court should treat it as a criminal act."

He added that Islamic texts stipulated the essence of healthy marriage was constant and mutual love. When any one of the couple felt there was need for beating, he said, "it's time for divorce".

The Supreme Court ruling on a domestic abuse case clarifies national law in an area that affects the family, the safety and welfare of women in society, and gender relations - The National Editorial
Dr Ahmed al Kubaisi, the head of Sharia Studies at UAE University and Baghdad University, said that under Sharia beating one's wife was an option to prevent the breakdown of the family.
He said it should be used only as a substitute to resorting to the police.
"If a wife committed something wrong, a husband can report her to police," Dr al Kubaisi said. "But sometimes she does not do a serious thing or he does not want to let others know; when it is not good for the family. In this case, hitting is a better option."
Dr Jassim al Shamsi, the dean of the college of law at UAE University, said the article in UAE law about wife-beating was not there to permit husbands to beat their wives, but to exempt them from punishment.
He said Sharia made it clear that any beating should be in no way severe. But Sharia, he said, repeatedly emphasised that love and respect were more important among husbands and wives than any discipline.
"The law does not ask husbands to beat their wives, it only means a man cannot be charged with anything if the beating did not leave any marks," Dr al Shamsi said. "It is a beating for discipline, not a violent or a vengeful beating. The Prophet said: "Only. The National's postal
Posted by Siad barre at 1:56 PM