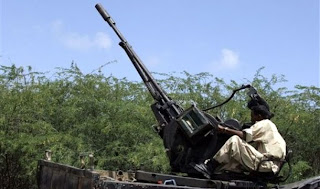 Al Shabaab's major attack has been defeated. BBC 04:00 GMT morning
reporting (now) says Al Shabaab's major attack has been repulsed and
they ran away in confusion. The rest of the liberation of Gedo is
hopefully underway since this was the expected big defense trying to
take on Barre Hiiraale from their front line defense in the northern
districts. Supposedly they attacked during maqrib and fighting just
ended around 2 am, with 9 confrontations taking place.  bbc

The town of Bulo Hawo which lies at the common frontier which Somalia shares with both Ethiopian and Kenya was seized by Somali government forces early this week but the area  was attack by  Islamist  yesterday  afternoon . following fierce battles between the insurgent fighters and Somali government forces."The town is now under Somali government forces control and shabaab  forces withdrew back. We don't know how things will turn out to be later but for now the town has fallen," Ahmed Weli, a resident in Bulo Hawo told   by phone. BBC   and terror free Somalia.A number of fatalities have been reported on both sides of the conflict while residents speak about dozens of injured people mainly civilians.Neither side have officially spoken about the latest development in the southern town which has been an Al Shabaab stronghold before it fell to the government control this week.Islamist forces have lately been loosing ground to Somali government forces and its allies in Mogadishu and in central and southern regions and this marks the first gains for weeks for the Islamist groups.

Condemnation of genocide in Kismay city (jubbaland state of somalia)