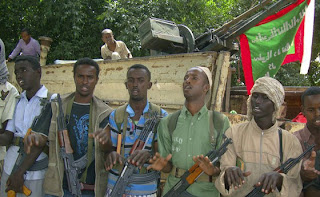 Heavy clashes between Somali forces loyal to the moderate Ahlu Sunna and insurgent fighters have left at least 20 people dead and 30 others injured in town of Dusomareb, central Somali,  Reports.

Both Ahlu Sunna Waljama'a and Al-shabab militant had exchanged gunfire in parts of the areas and residents said that there were some casualties reached insurgent militant.Reports indicate that the fighters of Al-shabab had taken over the control in Dusomarab for at least 5 hours, the group used arm robbery to capture resident vehicles in the town.“Al-shabaab militant take over Dhusomarab for almost 5 hours, they killed several people, also they took several vehicles,” a witness who spoke on condition of anonymity told terror free somalia.Located on a major road linking Somalia's capital Mogadishu with the northern autonomous region of Puntland, Dhusamareb are now in the hand of Ahlu-sunna after hours of combat with al-shabaab.On the other hand, Islamist clerics of Ahlu Sunna Waljama’a with many forces has left Addo district of Galgud region in central Somalia.Last night, Ahlu Sunna attacked bases  Al-Shabaab's stronghold of the troops of Himan and Hebeb (Hawiye)  habar-gidir sub clan (saleeban ) Tribal administration Al Shabaab alliance in  (town of  Adado) a shabaab supply line and lastly took over whole control of the district killing 8  saleebaan (haba-gidir)Hawiye Jehadest  during the clash between the two sides injuring more others.Ahlu-Sunna Wal-Jama has joined forces with African Union troops (AU) to increase war on al-Shabaab and Hizbul-Islam. The Ahlu-Sunna Wal-Jamaa group signed a military alliance in the African Union headquarters in Ethiopia.The influential Muslim group is a generally peaceful, moderate Islamist group that belongs to the Suffi tradition of Islam. It recently took up arms for the first time in Somalia’s 20-year civil war after its members were subjected to violence by the insurgent groups al-Shabaab and Hizbul-Islam.
The group currently controls the towns of Gurieel, Dhuusamareeb, and Abudwaaq in the Galgadud region. They seized control of these towns after defeating al-Shabaab and Hizbul-Islam forces.
Posted by Siad barre at 5:01 PM