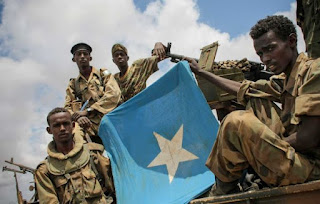 Members of the Somali National Army (SNA) display the Somali national flag from the former control tower of Kismayu Airport, after it was captured by Kenyan African Union Mission in Somalia (AMISOM) troops, October 2, 2012.

Qaeda’s affiliates across Africa – Somalia’s al Shabaab, Nigeria’s Boko Haram, and al Qaeda in the Islamic Maghreb – have apparently been increasingly seeking to coordinate their efforts.[1] The United States would face an al Qaeda-affiliated terrorist network that stretches across Africa if those efforts succeed. Al Shabaab has suffered major setbacks over the past year, including the September 28 loss of a major stronghold in the southern Somali port city of Kismayo, but the group has not been defeated. The fall of Kismayo could herald the collapse of the group’s quasi-state, but it may also serve to strengthen more radical factions within the terrorist group that prefer to focus on regional and global jihad. It will also strain the weak alliance of regional states and local groups, such as Kenya, Ethiopia, and their proxies, whose unifying interest has been the fight against al Shabaab and not a long-term vision for Somalia, over which they disagree. The fight against al Shabaab is not over in Somalia and now is not the time to declare victory; instead, now is the time to ensure that recent achievements last. 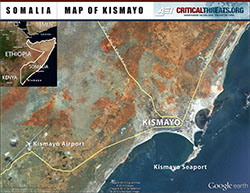 more Al Shabaab After Kismayo | Critical Threats
Posted by Unknown at 10:52 AM