"We congratulate the people of Somalia on the peaceful end to the transition. Statement by Ambassador Philip Parham, Chargé D'Affaires of the UK Mission to the UN, at the UN Security Council debate on Somalia 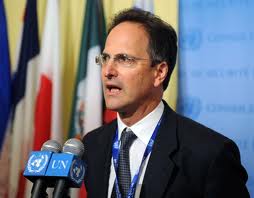 Statement by Ambassador Philip Parham, Chargé D'Affaires of the UK Mission to the UN, at the UN Security Council debate on Somalia

We are very grateful to you for arranging this timely debate so soon after the Secretary-General’s mini-summit on Somalia last month, and we welcome the Indian Minister of State to this meeting.

Many thanks to Ambassador Mahiga for his briefing and we still look forward to the possibility of a briefing from Commissioner Lamamra.

Much has been achieved in Somalia in the past twelve months, as we’ve heard. We congratulate the people of Somalia on the peaceful end to the transition and election of President Hassan Sheikh Mohamud. The transition was the most representative and transparent process in decades.

As the Secretary-General’s high level event made clear, the process must continue to be Somali-owned and Somali-led, with the international community playing a supporting and facilitating role. I hope that we will be able to forge a new partnership between Somalia and the international community based on the principles of mutual accountability, good governance and financial transparency, working for the benefit of the people of Somalia. We continue to think that the Joint-Financial-Management board would be a useful tool for the new Somalia government in pursing these aims. It will build confidence amongst the international community and provide the Somali people with a tool with which they can hold their government to account.

The upcoming reviews of the UN and AU [African Union] operations in Somalia provide a timely opportunity to ensure that the correct mechanisms are in place so that international assistance to Somalia is well-coordinated and effective. The needs of the people of Somalia must be at the centre of the reviews. But these reviews must also be complementary and coherent, outlining a clear delineation of responsibility between the UN and the AU and setting out how the wider international community can contribute effectively.

The Council and the wider international community must support the priorities that President Hassan Sheikh Mohamud has set out, including: improving security; economic recovery, improving basic services, strengthening governance and combating corruption, as well as continuing the process of political dialogue, including between Mogadishu and Hargeisa.

It is in that context that my Foreign Minister announced last month a further £10 million to help Somalia with its immediate needs. This is in addition to our £38m three year aid programme focussed on supporting core state functions throughout Somalia.

And as a further sign of our long-term commitment to Somalia we hope to open our new Embassy in Mogadishu in the Spring, should the security conditions permit.

Maintaining and increasing security and establishing clear governance structures will be vital to create the stability to allow increased delivery of basic services and economic activity. I pay tribute to the continued bravery and commitment of AMISOM and Somali National Security Forces who have made significant progress, including by liberating Kismayo only two weeks ago.

I urge Security Council partners to do all they can to support Somali and international efforts to increase security, including through AMISOM’s upcoming mandate renewal on which we will circulate a draft resolution to Council colleagues in the next few days.

There is much to be done, expectations are high and there are many challenges ahead, but Somalia has my government’s unwavering support.
I urge Security Council partners to do all they can to ensure Somalia consolidates recent progress, and continues on its national path to peace and prosperity.
Posted by Siad barre at 10:59 AM