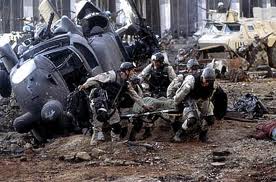 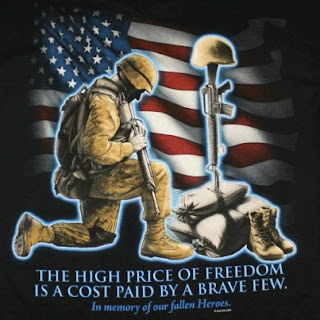 Out of respect for our finest & bravest families, this is the only image I will use:

Al Qaeda's  militia men shot down a Black Hawk helicopter, killing three Americans, mutilating and decapitating one American and charging the curious money to peek inside the "Gift of the USA" flour sac. This barely publicized event led directly to the mission to get Aidid on October 3, which saw 19 helicopters, 12 vehicles, and 160 men were sent to capture him in a building next to the Olympic Hotel. But Aidid and Qaybidiid were late and arrived as the attack began. Some say it was a deliberate set-up based on their experience with the July 12 ambush. Delta snatched 24 of Aidid's men who surrendered peacefully then led them down to the street for transport. Army Rangers had been dropped to provide perimeter security and when a Black Hawk crashed near Bakara market, the chaos began. Aidid had planned for this and his men set up withering crossfire inside the warren of buildings. Despite the initial rush of around 100 US troops shooting over 60,000 rounds in less than 30 minutes, the relief effort was called back.

The 90-minute operation turned into a two-day long battle. The ensuing television coverage of American bodies being desecrated resulted in the loss of popular support for the US mission and eventual pull out. Rarely is the peaceful lull that broke out after the violent incident reported.

Newly elected President Clinton, not wanting to absorb the political damage created by his predecessor George Bush Sr., ordered a full withdrawal by 31 March 1994 and all foreign troops, support contractors and UN workers were gone by March of 1995 when Aidid declared himself president. He was wounded and died in 1996 and in an odd twist of fate his son, Hussein Mohamed Farrah, who had immigrated to US at 17, was chosen to succeed his father as President. The irony was that Farrah was a US Marine who served in Somalia as a translator during Operation Restore Hope.

Although the fighting in Mogadishu was primarily between the SNU or Aidid's Habr Gadir clan and Ali Mahdi Mohamed's USC, and despite either the militias never hearing of al-Qaeda or Osama bin Laden, the event was used by Bin Laden to show that local fighters can defeat the world's most powerful army.

Even today, the condensed popular view of the event is a major consideration in the deployment of ground troops to any region. Although people initially are moved by scenes of suffering and starvation, political and popular support rapidly erodes when gruesome images of dead Americans are front and center as they were broadcast on television on October 5, 1993. The fact that they actually stopped the famine is long forgotten.