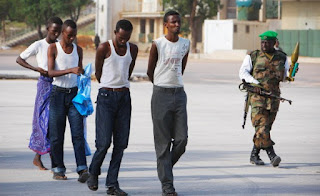 MOGADISHU, Oct 25, 2012 (terrorfreesomalia)  --AMISOM coalition forces in Somalia have carried out two overnight operations against Al Shabaab targets outside Mogadishu and in Kismayo which represent a double set back for the Al-Qaeda linked terrorist group.
During Monday night, AMISOM troops from the Ugandan contingent successfully raided an Al Shabaab hideout at Albao, 20 kilometres north-west of Mogadishu. A significant cache of weapons, improvised explosive devices, grenades and communications equipment was seized which can no longer be used against the local population.
On Tuesday night, Somali government forces together with AMISOM troops conducted a night raid at a recently established Al-Shabaab observation post near the new airport in Kismayo, which was secured on 2 October. During the raid, an assortment of weapons and ammunition was recovered from the site.
AMISOM Force Commander Lt-Gen Andrew Gutti said: "I pay tribute to the AMISOM coalition forces that continue to conduct operations across Somalia with the same goal: to work with the Somali government and its people to build a Somalia where its citizens can go about their daily lives in safety and provide for their families with confidence and dignity."