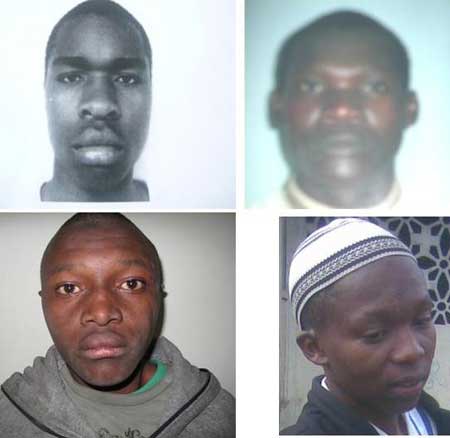 
Police have circulated four pictures of four Kenyans who joined Somalia’s Al-Shabaab militant group and have been linked to a number of terror activities in Nairobi and Mombasa.
The four are said to have been to Somalia where they received military training before they returned to Kenya.Police spokesman Eric Kiraithe said Sunday the suspects are on the lose and are planning terrorism at undisclosed places and urged the public to help in tracing them.“Evidence in possession of the police indicates that they have been involved in various acts of terrorism in Nairobi and Mombasa. The four are currently believed to be on the run inside Kenya and planning acts of terrorism in Mombasa and Nairobi,” said Kiraithe.The first suspect is identified as Hassan Omondi Owiti alias Budalangi alias Budapest alias Omosh.Kiraithe said police suspect he is in Nairobi or Mombasa.Police also want to question Shaban Namusenda Makotse who has reportedly adopted a strong Kiswahili accent to camouflage himself in crime and in particular terrorism.
Kiraithe said Yassin Olunga alias Ndungu has also been to Somalia for military training with a purpose of staging terrorism in Kenya.Another wanted Kenyan is Ali Masadiq who according to police is small bodied and can easily pass as a primary school pupil.“He is mainly used to carry out surveillance on potential terrorism targets and to convey firearms and grenades,” said Kiraithe.Police intelligence shows the four men have been named in some attacks that took place in Mombasa hence need to talk to them.
“Police would wish to warn the public that the above named persons maybe armed and dangerous. Any person with information on the whereabouts of the any or all of them should pass the information to police or other security officer promptly.”Kiraithe added police want another terror suspect Fuad Abubakar to report immediately to the nearest police station for questioning.Abubakar was charged in Mombasa law Courts earlier this year together with Briton Jermaine Grant for the criminal offences of being in possession of explosives, being member of an organized criminal and preparation to commit a felony. He is currently out on Sh2 million bond.  Abubakar is said to be in Mombasa but police are unable to trace him.
Reports show dozens of Kenyans who joined the militant group are returning back to the country after being ousted from their areas of operation by the Kenya Defence Forces and AMISOM troops.
The group of Kenyans alongside other foreigners are said to have come back with several explosives in readiness for use.Anti-terorrism police have so far arrested some of them but warn some are at large and planning for an attack.
Posted by Siad barre at 6:10 PM