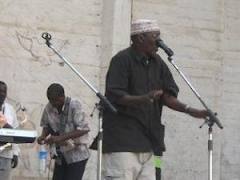 Gunmen have assassinated a well-known comedian and musician who poked fun at al-Shabab fighters in the Somali capital, police and colleagues have said, the latest in a string of attacks against media and cultural figures.


Warsame Shire Awale, a famous composer who had worked with Somalia's national army band before joining Radio Kulmiye as a drama producer and comedian, was attacked by two armed men in Mogadishu, the capital, late on Monday.

"Gunmen killed him ... we are investigating the matter and the killers will be brought to justice," police chief Ahmed Hassan Malin told journalists.

"Two men armed with pistols shot and wounded him near his house in Waberi district, he died shortly after in hospital," said Abdi Mohamed Haji, a colleague at Radio Kulmiye.
Ali Mohamed Hussein, a senior al-Shabab official, said denied the group were responsible for the death, blaming instead government forces whom he said "kill people for their telephones and their petty belongings".
"This gentleman was an old man and we had no wish to kill him," Hussein said. "Blaming al-Shabab for this is a politically motivated issue."
There is no doubt that Shabaab and those sympathetic to the terrorists murdered this man. Shabaab's press office are known liars, but its nice of al-Jazeera to slip in the savages denial so I don't have to go look for it.H\T The Jawa Report: al-Shabaab Murders Warsame Shire Awale Over Criticism
Posted by Unknown at 2:22 PM