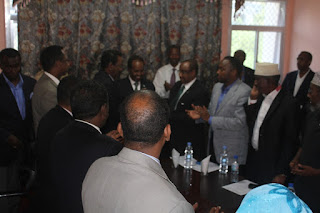 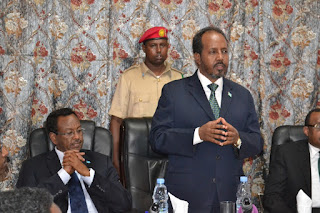 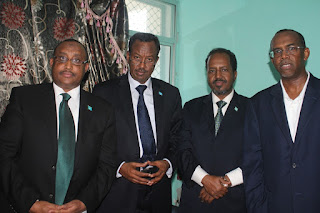 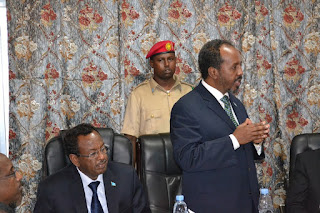 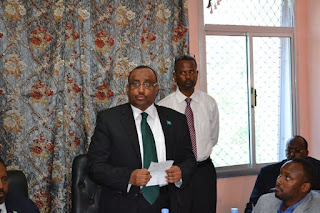 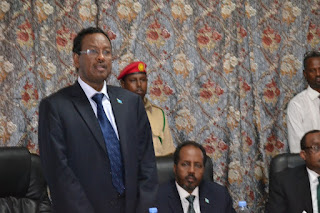 By Majid Ahmed in Mogadishu

"I am very glad today to hand over the office of the prime minister of the Somali republic," Ali said, according to Somalia's RBC Radio. He added that his government would be remembered for achieving security and stability in the short term they were in office. Ali served as prime minister since June 2011.

After officially taking office, Shirdon praised Ali for his efforts thus far and pledged to continue what was started.

"We will put all our efforts into bringing a fresh and quality cabinet of ministers who will serve this nation in this hard time," Shirdon said.

The president also praised Ali for his achievements and urged him to collaborate with Shirdon to continue the progress made.

"I congratulate Prime Minister Shirdon and encourage him to form an effective government so that he can gain momentum in completing the critical tasks ahead during the next four years," Mohamud was quoted as saying by Somalia's Shabelle Media Network.

A unanimous vote of confidence

Shirdon took office one day after the Somali parliament's unanimous vote of confidence for the new prime minister, which political analysts say bodes well for the future of Somalia.

He said the overwhelming support Shirdon received from parliament was "a promising step for the new prime minister".

Abdiaziz Hassan, a political economics professor at the University of Somalia, said, "The new prime minister needs to engage in large-scale consultations with various sectors of society to secure a strong government team that is able to deal with the current challenges in the country."

"The overwhelming confidence given to the new prime minister by members of parliament is proof of his wide popularity within the parliament and he should therefore use this momentum to his advantage to build an effective government," he told Sabahi.

Hassan said Somalis have high hopes for the government Shirdon will form. "Somalis hope the new prime minister will keep his promises and translate his words into actions," he said.

Mogadishu-based political analyst Ahmed Ulusow described the situation in Somalia as encouraging. "I am more optimistic with regard to the future of Somalia and I commend the step taken by the members of parliament to unanimously give their confidence to the new prime minister," he said.

"Somalis expect the new prime minister to select a ministerial team that is highly qualified, experienced and with integrity, and that does not include warlords who have caused all the problems in the country," he told Sabahi.

Ulusow said he is hopeful the new prime minister will overcome the immense challenges of improving the country's security situation, rebuilding public institutions and infrastructure, and putting in place regional administrations in the newly liberated areas.

Shirdon has also promised to improve the judicial system, put in place an effective government and move forward with national reconciliation, preserving the unity of Somalia.

As for foreign policy, Shirdon promised to work towards restoring Somalia's role in international forums.

"My government will work towards building a relationship that is built on joint collaboration and mutual respect with neighbouring countries and the international community," Shirdon said, addressing lawmakers before the vote. "We will re-invigorate Somalia's role in international and regional organisations in which Somalia is a member so we can bring back Somalia's prestige and dignity in international forums."

Shirdon is expected to form his cabinet in the coming days. The new Somali constitution gives the prime minister 30 days to form the cabinet and present it to parliament for approval.