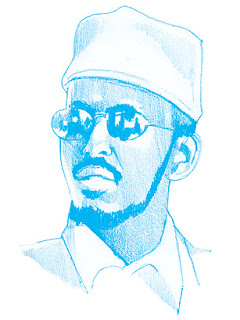 
The self styled Emir of the radical insurgent group Al-Shabab, Sheik Moktar Ali Zubeyr (also known as Ahmed Abdi Godane) has been named to TIME magazine’s annual list of 100 most influential people.

He appeared in the “rogues” section alongside embattled Syrian President Bashar al-Assad, North Korean dictator Kim Jong-un as well as Taliban leader Mullah Omar who both share a common allegiance to Al- Qaeda.


Godane, a veteran of the Afghan jihad, succeeded Sheikh Mukhtar Robow who led the group after the previous Emir Sheikh Adan Hashi Farah “Eyrow” was killed by a US Airstrike in May 2008. He first made international headlines in 2009 when he released a video urging Somali’s to fight against the TFG and its newly elected leader President Sheikh Sharif Ahmed. In early 2010 he released another statement on behalf of Al-Shabab in which he voiced his support and allegiance to Al-Qaeda and that he and his fighters “agreed to join the international jihad of Al-Qaeda". He is a designated terrorist by the United States.

Time Magazine has said he is driven by a “hypnotic appeal of establishing God’s kingdom on Earth”.


In recent news, he has been linked to unconfirmed reports that he ordered the execution by beheading of American Islamist radical Abu-Mansoor Al-Amriki (Omar Hammami); as well as the infighting between Al Shabab leaders, most notably the group’s military commander in the south Sheikh Hassan Dahir “Aweys”.
Posted by Unknown at 7:36 AM