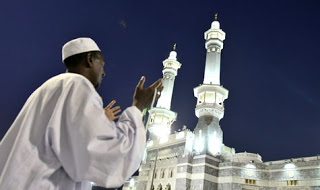 Ramadan Mubarak to all Muslim friends around the world.

beautiful month of fasting, prayer, mercy, forgiveness,charity,guidance, tranquility,reflection & peace
Muslims around the world will begin fasting from Monday june 6, 2016 and for a whole month thereafter, however, for some it will begin only if the moon is sighted.


Since the beginning of Islam, there have been debates as to what constitutes moon sighting. Some interpret that there has to be a minion to declare that they have seen it themselves with their own eyes, where some others do not accept the holiday unless they have seen it themselves. In the United States, there is an organization that monitors moon sighting called the Hilal committee. At one time it was acceptable if the moon was sighted elsewhere, but now, each group has to have their own moon sighting.


America's spirit of freedom touches every soul, no matter what religion or tradition they follow. American Muslims are no different, they prefer to have a pre-set date to start fasting and the celebration called "Eid" (pronounced as 'Eeed'). The idea is for them to take a day off from work or get an optional day off for their children from the schools. Always, the joy multiplies when the family and friends celebrate it together. They prefer not wait for the moon to show up to the bare eyes.


The conflict is the same every where on the earth. Each group subscribes to one of the four systems mentioned above. America is no different; you will find celebrations on one or three different days in any given city. The Sunnis, being the largest group has the greater division within, while the Shias, Ismailis, WD Mohammad, Bohra and Ahmadiyya follow the pre-determined dates. The consensus may be attributable to having central spiritual leadership in all groups except the Sunni. However like the American public wishes to see Republicans and Democrats drop the party lines and focus on what is good for America, the Muslims also wish they could celebrate the Eid on one single day. It ain't going to happen; it is human to disagree.


It is against the spirit of Ramadan to denigrate, diminish and devalue other practices. The essence of Ramadan is to become humble, simple and free from ill-will, anger, meanness and hate.

Let's fill our hearts with goodwill and honor Ramadan by saying "Eid Mubarak" or Happy Eid to every one who celebrates on a different day in the same town. The essence of Ramadan is joy and let's not prick any one's bubble; God has not signed a pact with any one behind others back, let's rejoice the differences of interpretations. If you want to celebrate every day, go to every celebration.
In the spirit of Ramadan, I pray that Ramadan gets into our hearts and minds and make us embrace all factions of Muslims without undermining their tradition and further pray that we treat every human on the earth with dignity, respect and care.