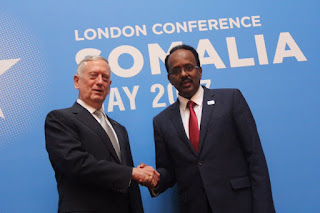 WASHINGTON, May 12, 2017 — Defense Secretary Jim Mattis came away from yesterday’s British-sponsored conference on Somalia in London with renewed hope for the peace process in the African nation.

Mattis told reporters flying with him back to Washington, that he had a private meeting with Somali President Mohamed Abdullah Mohamed, “and I came away from that heartened.”
The United States has a role to play in Somalia, and in helping that nation eradicate al-Shabaab, a vicious terror group, Mattis said. The United Nations, the African Union and the European Union joined with Arab, African and European nations to discuss the way forward.
International Support for Somalia 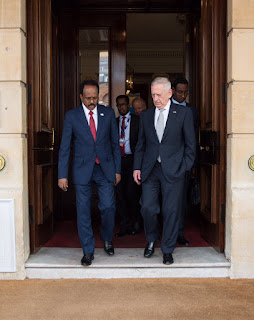 Mattis said Somalia has an economic and a governmental program to put it back on its feet, and that international support is crucial to the process.
“So, we were working on how the future looks and what nations could commit what to what and get the framework right,” Mattis said. “It includes on the security side both a continued maturation of their security forces in the defenses against al-Shabaab, but it also includes a reconciliation program designed to pull the fence-sitters and the middle-of-the-roaders away from al-Shabaab. It's very well put together.”
The holistic approach to the situation in Somalia is the one that has a chance of succeeding, Mattis said.
“There is certainly an attitude of renewed hope based on the election of what appears to be a very good leader in terms of understanding the need for military security, but as well economic efforts, and certainly reconciliation is going to have to mark this way forward, as well,” he said.
Confronting Terrorism
Mattis praised the African Union peacekeeping mission in Somalia, saying the African Union Mission in Somalia troops have done a good job in a difficult position.
“For years, AMISOM and the Somali soldiers have fought against a pretty tough enemy that has sworn allegiance … to al-Qaida,” Mattis said. “It’s an enemy that's got to be fought and the people have to be defended.”
Mattis took advantage of the Somali meeting to meet with Turkish Prime Minister Binali Yildirim. He said the meeting was an “honest, transparent and helpful” discussion between two NATO allies on NATO issues and other issues that directly impact Turkish security. The two leaders also discussed how to best work together to defeat the Islamic State of Iraq and Syria.
Mattis said Turkey is committed to the counter-ISIS campaign, “just like the rest of NATO and the 68 nations that are aligned against ISIS, and that includes in particular the campaign against the enemy’s … self-proclaimed caliphate in Raqqa.”