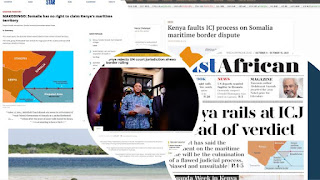 Kenya’s foreign ministry announced on Friday through its official Twitter account its position on the looming ICJ verdict on the Indian Ocean maritime delimitation between Somalia and Kenya, which is set to be delivered on Tuesday 12th October 2021.

Kenya’s tactical withdrawal ahead of the ICJ judgement offers no shortcut to freedom. It is still obliged to comply with the Court’s outcome whether it is in her favour or otherwise.

In hindsight, Kenya’s repeated belligerences and complete disregard to the Court mirrors Nigeria’s pattern of behaviours in the 1990s, when it challenged the ICJ’s jurisdiction over its land and maritime dispute with Cameroon. Just quick snapshot on the Nigerian case. In 1994, Cameroon lodged an application in the ICJ Registry instituting proceedings against Nigeria with regards to the sovereignty over the Bakassi Peninsula and the Lake Chad, and requested the Court to determine the maritime boundary between the two neighbouring States.

As grounds of its application, Cameroon cited article 36, paragraph 2 of the ICJ Statute by which both countries accepted the compulsory jurisdiction of the Court. Given this, Cameroon asked the Court to adjudge the sovereignty over the Bakassi Peninsula – by virtue of international law – as Cameroonian and alleged Nigeria was violating uti possidetis juris, which is the fundamental principle of respecting post-colonial boundaries.

Despite Nigeria’s repeated challenges of the Court jurisdiction, the ICJ handed down in 2002 its judgement on the sovereignty over the Bakassi Peninsula and ruled in favour of Cameroon. The Court ordered Nigeria, expeditiously and without any condition, to withdraw its military and police from the Bakassi Peninsula and from the areas of Lake Chad that falls under the jurisdiction of Cameroon. While Nigeria did not withdraw from the compulsory jurisdiction of the ICJ as a consequence of the adverse decision, it had reluctantly accepted and implemented the Court’s judgement.

The US withdrew from the hearing halfway through, however, not only has the Court established it had jurisdiction to hear the case and continued proceedings in the absence of the US, but also it held, among other things, that the US had violated its obligations under international law pursuant to article 2 (4) of the UN Charter and ordered the US to pay reparations to Nicaragua for all the damages caused by its breaches of international law.

If Kenya thinks that withdrawing its recognition of the compulsory jurisdiction of the ICJ at the last minute is good enough to wash its hands and walk away without any consequence, the fact of the matter is it has committed momentous lapse of judgement. In particular, at a time the US and its allies doggedly pursue upholding rules-based international order and continue challenging China’s claims in the South China Sea.

One wonders though, how the US and its allies would turn blind eye on Kenya’s disregard to international norms and rules-based order while persistently call out China’s excesses in the South and East China Seas, which has the potential to disturb post-Second World War Order.

In any event, if Kenya rejects to comply with the ICJ decision, Somalia will have recourse to article 94 (2) of the UN Charter which sets out “if any party fails to perform the obligations incumbent upon it under a judgement rendered by the Court, the other party may have recourse to the Security Council, which may, if it is deems necessary, make recommendations or decide upon measures to be taken to give effect to the judgement.“

Likewise, pursuant to article 51 of the UN Charter Somalia has an inherent right to defend its sovereignty and territorial integrity. Depending on which ever course of action it chooses, Somalia will have jurisdiction over the entirety of its maritime territory. And, all options will be on the table!