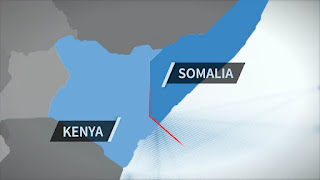 Kenya’s insatiable greed for Somalia’s waters begun following when Woodside petroleum company ended its offshore oil and gas explorations in western coast of Kenya in 2007, citing it was unable to find hydrocarbons in its Pompoo well.

Woodside petroleum disclosed in its press release issued on that day that according to satellite images it conducted on Somalia’s waters close to the border of Kenya and subsequent seismic tests found considerable traces of potential oil and gas deposits in the triangle area. With its deep knowledge of maritime laws, however, Woodside refused to take such risk of drilling oil and gas without the consent of Somali authorities.

Given this setback, in 2008 Kenya colluded with other multinational companies (MNCs) willing to steal Somalia’s resources with reduced costs, in the assumption that they can take unfair advantage of Somalia’s current circumstance and coerce its leaders to enter into dodgy bilateral agreement with Kenya, chipping away 100,000 square kilometres of Somalia’s maritime waters believed rich in oil and gas into Kenya.

To realise this strategic and economic objective and to build the confidence of MNCs investing in this area, Kenya launched the 2011 Operation Linda Chi and invaded Somalia on the premise of anticipatory self-defence, which is one of the reasons that the UN allows states to use force as set out under article 51 of the UN Charter: ‘Nothing in the present charter shall impair the inherent right of individual or collective self-defence if an armed attack occurs against a member…’

Not only did the attacks and the kidnapping incidents that Kenya cited as grounds for her invasion in Somalia were nowhere near the threshold that could trigger such military action, but also did the perpetrators behind those incidents themselves were Kenyans reacting to ATPU’s heavy handed tactics and extrajudicial killings meted out to coastal communities.

It is widely held that the low intensity insurgency hitherto brewing in Kenya’s coastal areas arose from the fact tacit government policies aimed to de-populate coastal communities & to transplant them to ethnic Kikuyus & Luo so that the demographic makeup in that area is permanently altered.

Rather than addressing those local grievances, Kenya has opted to externalise her domestic issues and policy failures with a view of adding another layer of external conflict driven by economic imperatives.

Kenya’s stated strategic objectives of its military intervention in Somalia was to drive Al Shabab out of the border area; establish a buffer zone; install an administration that is complaint to Nairobi; and use it as a bargaining chip to coerce Mogadishu government to accept Kenya’s terms.

Despite this, UK and France scrambled to the United Nation and African Union HQ to include Kenya in AMISOM troop contributing countries to save face and provide her with legal cover and international funding to realise her strategic and economic objectives by which both countries are allegedly direct beneficiaries

Throughout this period, Kenya has been at loggerheads with three successive Somali Federal governments. The latest of which is current FGS, which has come under a lot of pressure from Kenya to withdraw the case from ICJ, however, refused to budge & upheld Somalia’s sovereignty & territorial integrity.