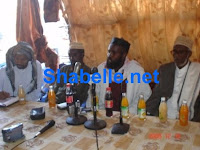 (TF.SF) - the Islamic clerics of Ahlu Sunna Waljama’a have explained more about their meeting in Abudwaq district in central Somalia, officials said in a press release issued on Saturday.The clerics said that the reason they held the conference in Abudwaq district was to liberate people they called had attacked the religion, people and parts of the Somali country saying that the people people in the areas under their control got peace and stability.
The press release said the main goals of the clerics were only two, first to fight with those are against the organization of Ahlu Sunna Waljama’a and to hold a large meeting greater than the one held in Abudwaq to reach the real goal of the clerics.The press release was talked more sides saying that their conference was aimed to improve more things like: restoring the public services, respecting, security, health, education and restoring all the bases of the human life.
Posted by Siad barre at 6:03 AM