The deputy speaker of the Somali Transitional Federal Government professor Mohammed Omar Dalha has warmly welcomed the new Flag of the semiautonomous region of Puntland in eastern Somalia. “Puntland is an autonomous region which is yet part of Somalia and it has not yet claimed to be a breakaway state, and for sure they have the right to have their own flag, by obtaining a flag doesen’t mean that now they are independent from the rest of Somalia, but merely a symbol which indicates that they are autonomous region, you can see from the their new flag 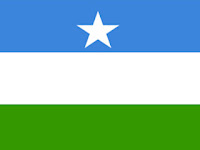 that they have not leftout the Somali national Flag it is there leading from top” professor Dalha added that apart from Puntland there is also Somaliland which is autonomous region, and has its own Flag for indication, despite claiming to be an independent state from the rest of Somalia. tribal enclave Somaliland has not yet received international recognition since it has claimed an independent state from the rest of Somalia. The parliamentarians of Puntland state house have on the 22nd of December unanimously voted for the new Flag of the region. The Somali constitution Minister Madobe Mohammed Nunow has earlier, said that Puntland has the right to obtain its own Flag, because he said it is clearly stated in the constitution. Somalia has not gained robust central government since late Honourable Mohammed Siyad Barre was toppled from power by USC Hawiye warlord in .January 26, 1991.then turned on each other. 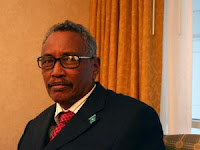 resident speak of insecurity
The president of Somalia’s Puntland state Abdirahman Mohamed Farole has for the first time commented about the increasing insecurity that has engulfed parts of the region.In an interview with the BBC Somali Service, President Farole said that the recent killings of a local lawmaker and a high court were a politically motivated assassination carried out by terrorist elements.Commenting about the refugees from southern Somalia currently hosted in Puntland, the president accused some for turning down the local spirit of keeping peace and order, instead instigating violence.He noted that the culprits behind the killing of Jugde Aware and lawmaker Ibrahim Elmi are currently in the custody awaiting the conclusion of police investigation.Meanwhile, Puntland President has called on youths, students and women to play a crucial role in assisting the security apparatus to maintain peace and security in the region.President Farole has also urged neighbouring countries to assist his government in combating the insecurity.His remarks come as crises meeting was hold on Monday to discuss the insecurity in the region with a call to the security forces to nab everyone suspected of causing disturbance.
Posted by Unknown at 9:57 PM