The United Nations Security Council imposed an arms embargo and other sanctions on Eritrea today in a move that in effect brands the country a pariah state. The UN voted to punish Eritrea for illegally supplying arms to al-Qaeda-linked Islamic insurgents in Somalia and for occupying disputed territory on its border with Djibouti. The 13-1 vote, with Libya against and China abstaining, represents an escalation of condemnation of Eritrea, which has repeatedly been accused of destabilising the Horn of Africa since it gained independence from Ethiopia in 1993 after a 30-year guerrilla war. Eritrea has gone to war against both Ethiopia and Djibouti and backed al-Shabaab Islamic rebels battling the internationally recognised government in Somalia, d

espite an arms embargo on that country. Sir Mark

Lyall Grant, Britain's UN envoy, said he hoped Eritrea would heed the warning sent by the Security Council in adopting today's resolution. "The United Kingdom urges Eritrea to stop its illegal actions ... and to engage constructively with international partners to help increase stability in the Horn of Africa," he said. "The nature of the international community's engagement with Eritrea in future will depend on that response." But Eritrea's ambassador to the UN rejected the Security Council resolution, blaming Ethiopia and the United States. "The Security Council has decided to impose sanctions on Eritrea on fabricated lies mainly concocted by the Ethiopian regime and the US administration," Araya Desta, the Eritrean envoy, said outside the meeting. The Security Council resolution is a rare case of "secondary sanctions" being imposed on a country accused of sanctions-busting in another state. A UN monitoring group has accused Eritrea of secretly shipping arms, including missiles and explosives, to Islamic insurgents trying to topple the Western-backed transitional government in Somalia, which has not had an effective government since the overthrow of the Honourable Mohamed Siad Barre in 1991.The resolution demands that all UN member states, "in particular Eritrea, cease arming, training and equipping armed groups and their members, including al-Shabaab, that aim to destabilise the region or incite violence and civil strife in Djibouti". The arms embargo will cover imports and exports of arms into and out of Eritrea, and calls on other UN members to inspect all suspect air and sea cargo to or from Eritrea and Somalia. The resolution also imposes a travel ban and asset freezes on "the Eritrean political and military leadership" and other individuals to be designated by a UN sanctions committee. The measures were drafted by Uganda, a Security Council member with peacekeepi 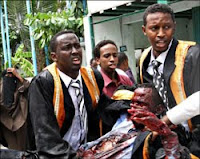