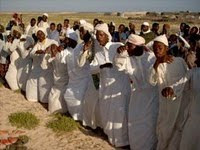 (TF.SF Abudwaq district )
The foundation of administration departments of Moderate Muslims Ahlusuna waljama' Group in central somalia has been put forward with conditions on the candidates willing to run for the posts in the Ahlusuna waljama' awaited administration in Somalia .Ahlusuna waljama' authorities already told that their administration which is getting its own shape would consist of 3 departments including 31 members in legislation council, 13 executive council, and 7 members in supreme council The participants in the conference in Abudwaq district in Galgadud region in the centre of Somalia have once again tabled the framework and conditions in which the running candidates will be required to run the posts The supreme council with a chairman, deputy chairman and secretary is composed of seven members of clerics with widespread knowledge in Islam and its sharia laws. It is the highest power in terms of keeping Islamic sharia laws and administration. The supreme council has capacity to make a final decision over what has been submitted to the council by the ruling council. The chairman and his deputy of supreme council must be competant, influantioal, strong decision taking with convenient time and have good knowledge in both laws - sharia and secularism Ruling council which consists of 13 including its chairman and his deputy has to administrate all duties and execute council's adminstration obligations on daily basis.The ruling council's chairman should have full knowledge of Sharia laws and the laws of secularism having experience in adminstration and had taken part in the Ahlusuna waljama' struggle Administration titles of Ahlusuna waljama' are shortlisted below Secretary of foreign affairs Secretary of interior Secretary of defence Secretary of finance and planning Secretary of health Secretary of educationSecretary of information Secretary of social affairs Secretary of livestock and wild animals Secretary of telecommunication
Ahlu Sunnah oo Ceelbuur Korkiisa Dikri ku Qabatay .Allahu Akbar!.Somali Armed Group Says It’s Poised to Defeat Al-Shabaab
Posted by Unknown at 5:40 AM