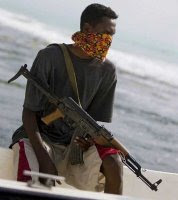 MOGADISHU, Dec 29 (Reuters) - Somali pirates have hijacked a UK-flagged chemical tanker sailing to Thailand from Spain, a maritime official said on Tuesday. Andrew Mwangura of the Kenya-based East Africa Seafarers' Association said the St James Park sent out a distress signal on Monday from the Gulf of Aden and had now changed course for the Somali coast. Somali pirates told Reuters late on Monday they had hijacked another vessel but did not give any details. (Editing by David Clarke)http://www.alertnet.org/thenews/newsdesk/LDE5BS05S.htm

File: The St. James Park, a U.K.-flagged chemical tanker is seen on the River Thames at Northfleet in Essex, England.

NAIROBI, Kenya — Striking into the heavily patrolled Gulf of Aden, Somali pirates seized a British-flagged chemical tanker — the first merchant vessel to be hijacked there in nearly six months, the same day that a ship was taken by brigands in the Indian Ocean, officials said Tuesday.

The double hijacking late Monday shows that, a year after an international naval armada began deploying off Somalia to protect shipping, piracy remains a problem. Monday's attacks occurred more than 1,000 miles (1,600 kilometers) apart, indicating the wide range of territory prowled by pirates and underscoring the difficulty of policing such a large area. Cmdr. John Harbour, the spokesman for the European Union's anti-piracy force, said the were likely only a coincidence and not coordinated because several pirate bands operate in the Indian Ocean and Gulf of ...more