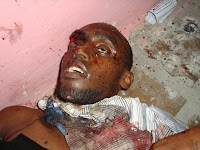 MOGADISHU, Somalia -- The Somali government said a suicide bomber who killed at least 22 people at a graduation ceremony last week came from Denmark, which would buttress views that the troubled African nation is attracting foreign fighters.

"He was one of the Somali children who fled from Somalia's war to Denmark, who returned to the country for a suicide attack when he got older," said Sheikh Aden Mohamed Nor, the speaker of Somalia's parliament. "He was sadly brainwashed by foreigners to massacre his people," Mr. Nor said late Thursday.Mr. Nor said officials identified the bomber during an into the attack, but declined to offer additional details about the bomber or the investigation.Some Western officials say Somalia, on Africa's eastern horn, is becoming a sanctuary for al Qaeda terrorists from Pakistan, Afghanistan and Iraq. The Somali government, able to rule only a small swath of the country's capital, has been largely powerless to stop the influx, they say.A man said to be the father of the alleged bomber, speaking from Denmark, said his son was a victim at the graduation ceremony, not the man who blew himself up amid graduating students and government officials, according to the Voice of America's Somali service. Three government ministers were killed in the attack.A Somali community leader in Copenhagen, Ahmed Dhaqane, told the BBC Somali service that the suspect had become deeply religious during his time in Denmark, and had recently left Denmark for Mogadishu with his pregnant wife.Human-rights activists say hundreds of Somali refugees now in camps in neighboring Kenya are being paid to join militant outfits and return home to help destabilize the government.Somali officials have blamed Islamist militant group al Shabaab for the attack last week. An al Shabaab spokesman denied the charge.Al Shabaab has claimed responsibility for previous suicide bombings in Mogadishu. Residents in the towns of Marka and Kismayo, two al Shabaab power bases, say al Shabaab officials have delivered religious speeches in which they described the bomber as one of their mujahedeen, or holy warriors.Somali and Western officials accuse the group of recruiting Somali students from the U.S. and other Western countries. Last month, U.S. federal prosecutors charged eight men with recruiting U.S. immigrants from Somalia to join al Shabaab. Five of the recruits have been killed in fighting in Somalia, one of them while carrying out a suicide bombing, according to U.S. officials.The U.S. government has designated al Shabaab as a terrorist group. U.S. and Somali officials allege the group receives weapons and bomb-making training from foreign al Qaeda fighters.The attack has sparked an angry public backlash against al Shabaab. On Wednesday, dozens of Somalis marched through Mogadishu protesting against militant violence. Some protesters burned the black banners representing the al Shabaab group. "Al Shabaab massacres our people! They have put us into trouble," shouted one protester, Halima Abdi. "They were behind that attack -- no doubt!" http://online.wsj.com/article/SB126045599245185465.html?mod=WSJ_hpp_sections_world