MOGADISHU, Somalia – In a setback for U.S. investigators probing links to the attempted attack on a Detroit-bound airliner, a Somali official said Thursday that another suspect who tried to board a plane with chemicals already had been freed.His release earlier this month will hamper efforts to learn if the incident in Mogadishu was linked to the attempted attack against the U.S.-bound plane on Christmas Day. Terrorism analysts had said the arrest in Somalia could prove highly valuable to the U.S. investigation.Somali Police Commissioner Gen. Ali Hassan Loyan said a Somali court released the suspect Dec. 12 after ruling that officials hadn't demonstrated he intended to commit a crime. The man, whose name has not been released, said the chemicals were for processing camera film.In light of the attempted attac 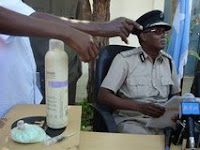 k on the Detroit-bound plane, Loyan said Somali authorities would share information and the confiscated materials with U.S. officials."Somalia's federal government affirms that it is ready to double its cooperation with the countries in the world, particularly with America, for it is clear that the incident that happened in Mogadishu and the one that happened in a region in America are similar," Loyan told a news conference in the Somali capital.The Somali case drew little attention before the attempted attack on the U.S.-bound plane. The Homeland Security Department did not learn of the November incident at Mogadishu's international airport until Wednesday, when U.S. officials began investigating for links between it and the Detroit case.State Department spokesman Ian Kelly said Wednesday that linking the case to the Christmas attack "would be speculative at this point."A Nairobi-based diplomat, though, said the incident has similarities to the attempted attack on the Detroit-bound plane. The Somali was said to have a syringe, liquid and powdered chemicals — tools similar to those used by the Nigerian suspect on Northwest Airlines Flight 253. The diplomat spoke on condition of anonymity because he wasn't authorized to release the information.The Somali suspect was arrested by African Union peacekeeping troops before boarding the Daallo Airlines plane bound for the northern Somali city of Hargeisa. The plane was then headed to Djibouti and Dubai. Officials on Wednesday said he was arrested Nov. 13; Loyan said he was arrested Nov. 6. The reason for the discrepancy wasn't clear.A Somali security official involved in the Mogadishu arrest said the suspect had a 1-kilogram (2.2-pound) package of chemical powder and a container of liquid chemicals, items that Loyan displayed on Thursday.A government-appointed expert concluded that the materials could not have brought down the commercial airliner. Loyan said the expert did conclude though that the materials were a danger to the aircraft.For the Amsterdam-to-Detroit flight, Umar Farouk Abdulmutallab allegedly hid explosive PETN in a condom or condom-like bag just below his torso. In the Somali case, the powdered material smelled strongly of ammonia.Michael Stock, the president of Bancroft, an organization that advises AMISOM, the African Union peacekeeping force in Mogadishu, said after officials discovered the chemical materials on the Somali suspect the materials were provided for analysis to Western embassy officials involved in supporting AMISOM.U.S. investigators say Abdulmutallab, the Nigerian suspect held in the Detroit case, told them he received training and instructions from al-Qaida operatives in Yemen, which Western officials say is a jumping-off point for foreign fighters slipping into Somalia. Large swaths of Somalia are controlled by an al-Qaida-linked insurgent group, al-Shabab.Abdulmutallab is charged with trying to destroy an aircraft. U.S. authorities allege he tried to ignite a two-part concoction of PETN and possibly a glycol-based liquid explosive, setting off popping, smoke and some fire but no deadly detonation.If the Somali suspect was planning anything similar, it wasn't known what his specific target might have been.

Most passengers on Daallo's Mogadishu route are Somali. The carrier's Web site calls it the national airline of Somalia's neighbor, Djibouti.Some 1,800 U.S. troops are stationed in Djibouti, while Dubai would offer the greatest range of West-bound flights along the route in question.http://news.yahoo.com/s/ap/20091231/ap_on_re_af/af_somalia