Terror suspect out of hospital, held at undisclosed location 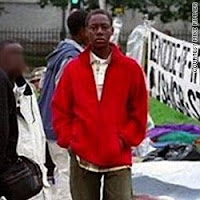 CNN) -- Investigators combed through Umar Farouk Abdulmutallab's history Sunday in hopes of learning how the British-educated son of a Nigerian bank executive ended up carrying what authorities said was a bomb onto a Michigan-bound jetliner.
Abdulmutallab was released from a hospital in Ann Arbor, Michigan, on Sunday after being treated for burns, according to Gina Balaya, a spokeswoman for the U.S. attorney's office in Detroit, Michigan. The 23-year-old is charged with attempting to set off an explosive device aboard a Northwest Airlines flight from the Netherlands shortly before its landing in Detroit on Christmas Day, and was being held in an undisclosed location, Balaya told CNN.
Meanwhile, investigators were trying to retrace Abdulmutallab's steps halfway across the globe, from the Arabian peninsula to West Africa to Britain.
Abdulmutallab claimed to have extremist ties and said the explosive device -- made from a plastic explosive known as PETN -- "was acquired in Yemen along with instructions as to when it should be used," according to a federal security bulletin.
A source with knowledge of the investigation told CNN Sunday that the amount of explosive was sufficient to blow a hole in the side of the aircraft.
U.S. intelligence warns that the al Qaeda terrorist network has established a foothold in Yemen, the ancestral homeland of its founder, Osama bin Laden, where government troops are now battling both al Qaeda operatives and a Shiite Muslim separatist movement..more.Terror suspect out of hospital
Posted by Siad barre at 7:38 PM