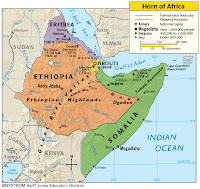 ‘We don’t want to take sides in Somalia. Somalis are our brothers.” So said Araya Destra, Eritrea’s UN ambassador, after the Security Council levied sanctions against the country on Wednesday. Mr Destra is partially right – certainly deep ties of kinship bind the East African neighbours – but he is also being plainly disingenuous. There is little doubt that Eritrea, like many others, is interfering in Somalia’s destructive stalemate. With friends like these, who needs enemies?The sanctions come on the back of charges that Eritrea is supplying arms to the al Shabaab militia in Somalia, as well as provoking a border dispute with Djibouti. But Eritrea is hardly alone on either charge. East Africa’s colonial-era borders are disputed on every side. And in Somalia itself, military interventions ranging from the Americans to Arab al Qa’eda have turned the failed state into a proxy b

attleground.Ethiopia, Eritrea’s chief regional rival, returned in 2008 from a counterproductive, US-backed invasion of Somalia that only hardened support for al Shabaab. In turn, Eritrea’s covert intrusions – directed against Ethiopia as much as anyone else – are continuing hostilities left from the 30-year war.But unlike Ethiopia, where domestic programmes, international aid and investment have pulled the country back from the famine years of the 1980s and 1990s, Eritrea is still caught in a downward economic spiral. The country is stuck in its isolation, with cottage industries in the capital, Asmara, relying on scrap metal from Soviet-era tanks to produce goods. The new sanctions regime, which imposes an arms embargo, places a travel ban on individuals and freezes assets, will only deepen the country’s economic plight.
There is a significant interest in reducing arms shipments to the area, where military build-ups come at the price of economic and infrastructural development, but that interest is not limited to Eritrea. China, which abstained from the Security Council vote, cited its preference for diplomacy over punitive measures. Certainly Beijing’s policy of non-intervention except to defend its economic interests is an immature model of diplomacy, but there is little doubt that real progress will come only by bringing the diverse parties to the negotiating table.
On the other side of the Red Sea, the Horn of Africa states are bound to the Arab Peninsula by ties of trade and history. If nothing else the exchange of people, ideas and arms across borders makes this an issue of regional and geopolitical importance. Only when other countries stop choosing sides in these conflicts will East Africa be able to put its house in order.http://www.thenational.ae/apps/pbcs.dll/article?AID=/20091225/OPINION/712249948/1033/opinion
Posted by Siad barre at 9:51 PM