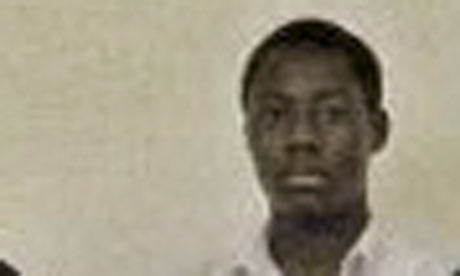 Umar Farouk Abdulmutallab, the terror suspect who allegedly tried to blow up Detroit-bound Flight 253 on Christmas Day, was said to have been given training in Yemen. Photograph: HO/Reuters

An insurgency in the remote Shabwa region of Yemen backed by groups claiming loyalty to al-Qaida has provided a new base for the terrorist network, which is under pressure in Afghanistan and Pakistan.Yemen, where the suspected airline bomber Umar Farouk Abdulmutallab was allegedly trained by al-Qaida operatives, has had a reputation as a terrorist haven since the 2000 suicide attack against the warship USS Cole. Seventeen US sailors died when attackers rammed the destroyer with a small boat laden with explosives in the port of Aden.The strategically important but impoverished country is considered a key training ground for Islamist extermists along with Pakistan and Somalia. Last week a pro-al-Qaida group in Yemen said it had declared war on the US.Since the summer, hundreds have been killed and thousands displaced by clashes between government troops and rebels with the Zaidi sect, a branch of Shia Islam in the Sunni-dominated country. Western analysts believe al-Qaida has been able to establish a regional base in Yemen because the government is weak and distracted by internal conflict.The president, Ali Abdullah Saleh, has co-operated with Washington's so-called war on terror, receiving tens of millions of dollars of aid and security assistance in return. However, it is feared that Saleh's support for the west has drawn the ire of Islamist extremists.Last week, the government launched an air strike against what it claimed was a meeting of high-level operatives in the Shabwa region. At least 30 militants were claimed to have been killed, possibly including Anwar al-Awlaki, a radical cleric linked to last month's mass shooting at the Fort Hood military base in Texas that left 13 dead.Almost half of the 210 detainees at Guantánamo Bay are Yemeni, and US intelligence sources say that about 60 continue to pose a security threat. Yemen's instability is thought to be one of the main reasons why Barack Obama will be unable to meet his January deadline to shut the detention facility.The Foreign Office advises Britons against travelling to Yemen because "there is a high threat from terrorism", and says terrorists in the country continue to plan attacks. "Attacks could be indiscriminate, including against western and British interests, such as residential compounds, military and oil facilities, and transport and aviation interests," the FCO advice states.http://www.guardian.co.uk/world/2009/dec/27/yemen-al-qaida-safe-haven