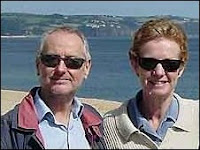 Two British hostages being held by pirates in Somalia are facing a Christmas in captivity with no immediate sign of their release.

Paul and Rachel Chandler, 59 and 55, from Tunbridge Wells, Kent, disappeared on 23 October in the Indian Ocean.Somalia's Radio Gaalkacyo said the couple faced daily threats from the pirates who hijacked their yacht.The Foreign and Commonwealth Office (FCO) said it was continuing to monitor the situation "closely".It repeated its call for the couple to be released.It also said it was in "close contact" with the Chandlers' family and was offering support.Radio reports on Wednesday from the coastal town of Xarardheere, also known as Harardheere, said the hostages were facing difficult living conditions while in captivity.The pirates have previously demanded a ransom of $7m (£4.3m) in a phone call to the BBC, and said they would shoot the couple if the ransom was not paid.

According to the radio broadcast, one of the pirates has said they will give the British government a short period of time in which to organise the ransom payment.The FCO has previously expressed sympathy for the victims' families, but has continued to reiterate its position that it does not "make substantive concessions to hostage takers, including ransoms".The Chandlers have previously spoken on camera to warn that their captors were "losing patience" and could kill them.Their family made another appeal for their release after seeing the footage of them surrounded by gunmen.Their yacht has since been returned to Portland, Dorset, on board the Royal Fleet Auxiliary (RFA) Wave Knight.And Somali pirates have recently increased their operations off Somali waters. The Somali government has called for action to combat the pirates but said it needed support from the international community.