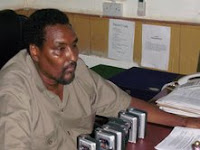 Former mayor of the Somalia's capital Mohamed Omar Habeb 'Mohamed Dhere' who was released by the Ethiopian forces yesterday in Baidoa town, southwest of the country accused on Friday senior government officials of been responsible for his arrest. Speaking to BBC Somali service hours after his release, Mr. Habeb, said the Ethiopian military officers confirmed that prime minister of transitional federal government and his deputy ordered his arrest. "I was suspecting or the Ethiopian military officials indicated, Nor Adde, the prime minister and Ahmed Abdisalan, deputy prime minister were the master minders of my arrest and they told the Ethiopians that i was planning an attack on their soldiers," said Habeb who gave details on how the Ethiopian soldiers apprehended him. I was dealt well during my detention he said. " I was arrested with one of my administration officers, we both had been held in an Ethiopian military camp in Baidoa town," added Habeb. Mr. Habeb who was behind the bar for three weeks underlined he is not still giving up his political ambitiom and said he will form a new political party. "i will go back to Mogadishu to serve for my people,"
Posted by Siad barre at 3:14 AM