NEW deal to enhance co-operation between states fighting Somalian piracy has been signed by nine countries. The code of conduct was signed by eight African coastal nations and Ethiopia at a high level meeting organised by the International Maritime Organization in Djibouti this week. Signatories to the code have agreed to share information and co-operate on anti-piracy operations in the region. The agreement makes specific reference to cooperation in the “arrest, investigation and prosecution” of suspected pirates as well as boarding and seizing suspected pirate vessels. “The adoption of this instrument shows that countries in the region are willing to act concertedly and together, contributing to the ongoing efforts of the broader international community to fight the scourge of piracy and armed robbery against ships in the area,” said IMO secretary-general Efthimios Mitropoulos following the meeting. The agreement also provides for the creation of three information centres in Mombasa, Dar es Salaam and Sanaa and a training centre for anti-piracy units in Djibouti. The code is open for signature by 21 regional states however only Djibouti, Ethiopia, Kenya, Madagascar, the Maldives, the Seychelles, Somalia, Tanzania and Yemen have so far signed the deal.
Prosecuting pirates
I know it's not right. But the amount of ransom you can get is wonderful. Nowhere in Somalia is safe. You be shot or hit by a mortar just walking down the street. So rather than die poor, why not join the pirates and earn a lot of money."
Somalia: a haven for pirates Ali Ibrahim Hussein voices the opinion of a lot of young men in Somalia. He's 22 and his father is a pirate. And while Ali hasn't yet hijacked a ship himself, he is planning to follow in his father's footsteps. more,,http://www.radionetherlands.nl/thestatewerein/otherstates/tswi-090131-prosecuting-pirates
I thought I was going to be executed, says Briton taken hostage by 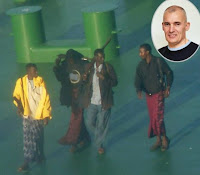 Somali pirates on oil supertanker
A Briton taken hostage on an oil supertanker relived his 57-day ordeal at the hands of Somali pirates last night - and spoke of the moment he feared he would be executed.
Chief engineer Peter French, 45, and the 25-man crew of the Sirius Star - the largest ship ever to be hijacked - were rounded up by gunmen who had already warned them: 'If they try to rescue you we will shoot you all.'
He recalls: 'They saw flashing lights in the distance and thought it was special forces coming to storm the ship.
'They were running around shouting and screaming and waving AK47 rifles around. What they saw was from a lighthouse - but it took the captain ages to convince them. We were frightened.'more..http://www.dailymail.co.uk/news/article-1127259/I-thought-I-going-executed-says-Briton-taken-hostage-Somali-pirates-oil-supertanker.html?ITO=1490
Posted by Unknown at 11:24 AM