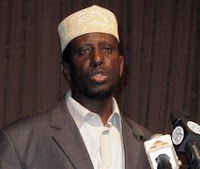 DJIBOUTI – Somalia's parliament elected a moderate Islamist leader as the country's new president early Saturday, handing over the elusive task of stabilizing a country wracked by violence and anarchy for nearly 20 years.
Sheik Sharif Sheik Ahmed was elected in neighboring Djibouti after the last president — a former soldier, rebel and warlord named Abdullahi Yusuf — resigned in December after failing to pacify the country during his four-years as president .president Sharif Ahmed was chairman of the Islamic Courts Union that ran Mogadishu for six months in 2006 before Ethiopian soldiers drove them from power. His election raises hopes that he will bring many of Somalia's Islamic factions into a more inclusive government. But the Western-backed government wields little control in Somalia — just a few blocks of the capital, Mogadishu, where African Union peacekeepers patrol. An Islamic insurgent group called al-Shabab, who say they don't recognize the government, have taken over most of Somalia.more..http://news.bbc.co.uk/2/hi/africa/7860295.stm
Posted by Unknown at 10:44 PM