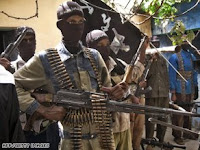 CNN) -- The United Nations considered suspending delivery of food to areas of Somalia after the recent killings of two aid workers, said a spokesman for the organization's World Food Program.Gunmen shot and killed the workers in early January, causing the U.N. agency to worry about the safety of its staff."We initially considered suspending WFP food distributions until security improves," said Ramiro Lopes da Silva in a statement released this week.
"But such a step would hurt the very people we seek to help, especially women and children suffering the most from this merciless conflict."The agency still plans to deliver enough food to feed 2.5 million people in the next two months, but aid workers had concerns about their safety, Lopes da Silva said."We want community leaders to step forward and offer us clear assurances that WFP workers will be able to carry out their humanitarian work in safety," Lopes da Silva said. more..http://edition.cnn.com/2009/WORLD/europe/01/24/un.somalia/index.html?eref=edition
Posted by Siad barre at 12:46 AM