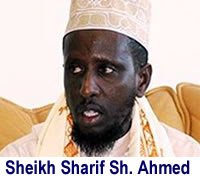 Somalia - The Alliance for the Re-liberation of Somalia (ARS) ICU has nominated Sheik Shariif Sheik Sheik Ahmed for the presidency of Somalia in a meeting they held today in Djibouti. In a press conference following the their meeting, Prof. Abdurrahman Hajji Ibbi read a communiqué stating that Sheik Shariif is their only candidate for the presidency of Somalia.
Sheik Shariif also spoke at the press conference and thanked members of the ARS for nominating him as their candidate for the presidency of Somalia and said he accepts their nomination. The ARS has 275 members in the enlarged Parliament of 550 members. The other 275 members come from the Transitional Federal Government (TFG). While the ARS has only one candidate, so far, running for the presidency of Somalia, there are several candidates on the TFG side running for the presidency. Among those who have declared their intention to run for the Somalia’s presidency include the acting Prime Minister Mr. Nuur Hassan Hussein (Nuur Ade)TFG from Mugdishu , the former Prime Minister of the TFG Mr Ali Mohamed Gedi from Mugdishu , Mr. Mohamed Qanyare Afrah TFG from Mugdishu a hawiye clan warlord , former Prime Minister of the TFG Mr. Mohamed Mohamud Guuleed Ga’mo Dheere TFG from mugdishu, Dr Ali Khaliif Galayr from somaliland the former Prime Minister fail TNG government . Mr. Ade Gaabow TFG from Mugdishu, Yusuf Omar Azhari A senior advisor to President Yusuf TFG from puntland state, and independent candidate General Masalax Mohamed Siad Barre from jubbaland state of somalia .
Chairman of the Alliance for the Re-liberation of Somalia (ARS) Sheik Sharif Sheik Ahmed Announced today (Sunday) nominated to compete for the post of the next president of the Transitional Authority in Somalia in the elections which will be held by the Somali parliament in Djibouti capital later this month.. In press conference he held in his residence in Djibouti , Mr shariif said he decided to contest the forthcoming presidential elections in Somalia at the request and the desire of a large number of members Alliance for the Re-liberation of Somalia (ARS..
The leader of Somalia's main opposition group of ARS Sheikh Sharif Sheikh Ahmed says hewill run for the country's presidency.Speaking at the peace talks in Djibouti Sheikh Ahmed said he would participate the candidates running for the anarchic country's presidential position.
"After careful thinking' I have decided to be a candidate for Somalia's presidency" the moderate leader said.Ahmed's ARS opposition group has signed internationally-backed peace process with the Somali government that saw the signing in in Djibouti of a ceasefire with the moderate Islamist opposition in October 2008.somalia's parliament will elect its new president by secret ballot.The winner must garner a two-thirds majority of the votes. If not, a second and third round of voting is called. In the last round, the winner would only need a simple majority.
Conflict in Somalia and power struggles that erupted since 1991 have scuppered successive initiatives to restore any semblance of order.Hardline Islamist fighters are continuing their military campaign against the government.
Posted by Unknown at 8:26 PM