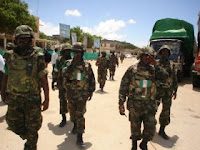 MOGADSHU -The main road of Maka almukarama in the Somali capital Mogadishu has been reopened after suicide bomber has exploded yesterday (Saturday) near the AU peace keepers’ military base around that road which has left at least 15 and injured more than 30 civilians, on Sunday. Suicide car bomb
Joint forces of the African peace keepers known as AMISOM and Somali government soldiers have closed the road after the suicide bomb attack was targeted to their military base in around Shaqalaha building near Maka almukarama road in Mogadishu. Movement of the people and transportations have been reopened and the drivers have told Shabelle radio that they have restarted their travel on Maka almukarama main road and welcomed the reopening of the road which is the most important and useful street in the Somali capital Mogadishu. “we came across many problems including robbing, threatening and we have been using rough streets far away from Maka almukarama road after the soldiers closed it when the accident of the explosion occurred there. But now we are very happy to use it once again,” one of the drivers said.
All the residents of the area where the explosion occurred were indoors till yesterday’s catastrophe after the Ugandan and government troops halted the movement of people and transportation around there. Maka almukarama is a key road that connects between the presidential palace and Km4 and it was the only street opened that most of the people in Mogadishu used since the clashes between Islamists and allied forces that caused all the streets in the capital to be closed.
'Cowardly' suicide bombing kills 15 in Mogadishu
http://www.cnn.com/2009/WORLD/africa/01/24/somalia.car.bomb/index.html?eref=rss_world
Al-Shabab claims
deadly suicide bomb explosion which rocked Mogadishu, the capital of Somalia on Saturday ? it is the worst attack happened in the capital since the Ethiopian withdrawal a week ago.
Today?s suicide attack was apparently aimed at the African Union of peacekeepers stationing at former labor house on Maka Al-Mukarama street in Hodan neighborhood in south of Mogadishu, witnesses said.
Medical sources told Waagacusub Media that one of the dead was a police man while the rest were civilians whose bus hit by the explosion.
Mayor of Mogadishu Mohamed Osman ?Dhagah-Tur? who reached the scene after the blast told reporters that they suspect it was act carried out by the Islamic militants known as ?Al-Shabab Mujahideens?
?One of the police officers stopped the car mounted with explosives before the suicide bomber blew up where the policeman perished on the spot and also the bomb killed 14 passengers who were onboard a mini bus passing by there,? said Osman. ?it is clear that they massacring the civilians. Mr. Osman strongly warned against the rising danger by the Islamic radicals who he accused of opposing peace and stability back in Somalia. ?We are asking for the international community to help Somalis in the fight against the extremists,?
This comes as power sharing talks continue in Djibouti between the government and rebel groups with the possibility of electing new president to lead a country with so many obstacles ahead. The latest bomb attack followed shelling hit in and around main Bakara market after Shabab fighters attacked a base by AU peacekeeping forces near the area of the suicide explosion. Mogadishu?s deputy mayor Abdifatah Shaweye who also spoke about the explosion said he is confirming that the bomber was a foreigner. ?I saw a piece of white skin which clearly shows that he was not Somali,? he said adding that the security forces are conducting investigations on the explosion. The radical group of Al-Shabab claimed the responsibility of the latest suicide attack saying they had hit the right target on AU troops killing several soldiers but spokesman for the African Union Peacekeepers Captain Bridge Bhuko denied that and said they have received no casualty as two hundred miters away from the site of the blast.Somalia has been without an effective government since the 1991 ouster of Mohamed Siad Barre touched off bloodletting that has defied numerous bids to restore stability.heldSomalia has been at war since 1991, The Horn of Africa nation has been plagued by chaos and clan-based civil war since when hawiye Warlordism, terrorism. PIRATESM ,(TRIBILISM) Replaces the Honourable Somali President Mohamed Siad Barre administration .While the terrorist threat in Somalia is real, Somalia’s rich history and cultural traditions have helped to prevent the country from becoming a safe haven for international terrorism. The long-term terrorist threat in Somalia, however, can only be addressed through the establishment of a functioning central government Videos: Jihad Camp in Somalia; English-Speaking Recruits WWW.KATAAIB.NET IN VANCOUVER WA, PRIVATE INVESTIGATOR BILL WARNER... Most of the Terrorist are from Hawiye tribe (al-shabaab) The leadership is mostly sub-clans of Hawiye (Habar Gidir clan) With The Exception Of OGADEN CLAN http://www.youtube.com/watch?v=dB2mnoXLoec&feature=related (ONLF )own hassan turki(http://en.wikipedia.org/wiki/Hasan_Hersi) and Abu Mansur a foot soldier from al-Qaeda any talks with Al-Shabab which is opposed to both the TFG and the Union of Islamic Courts. most of Mostly Hawiye Insurgents are from Somali clan of ,Habar Gidir group (itself a Hawiye subclan). Hawiye subclan).
Posted by Siad barre at 12:36 AM