car bomb aimed at African Union (AU) peacekeepers in the Somali capital missed its target and killed 13 civilians and a policeman Saturday.
Islamist insurgents have been battling the country's Western-backed interim gove

rnment since the start of 2007, and have stepped up attacks since the administration's Ethiopian military allies withdrew from Mogadishu this month. more.. 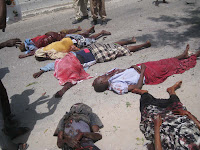 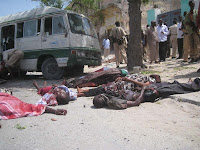 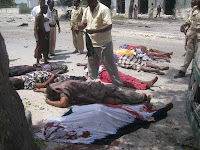 suicide bomb kills 30 in Somali capital
viewed some horrofing pics, go to
http://www.somaliweyn.org/pages/news/Jan_09/24Jan18.htmliweyn.org/pages/news/Jan_09/24Jan18.html
http://hosted.ap.org/dynamic/stories/A/AF_SOMALIA?SITE=FLDAY&SECTION=HOME&TEMPLATE=DEFAULT
A young man beheaded by savage hawiye( knife)VERY VERY GRAPHIC VIDEO Images
hawiye barbaric and genocidal funded, very sick and twisted vedio
Somalia has been without an effective government since the 1991 ouster of Mohamed Siad Barre touched off bloodletting that has defied numerous bids to restore stability.heldSomalia has been at war since 1991, The Horn of Africa nation has been plagued by chaos and clan-based civil war since when hawiye Warlordism, terrorism. PIRATESM ,(TRIBILISM) Replaces the Honourable Somali President Mohamed Siad Barre administration .While the terrorist threat in Somalia is real, Somalia’s rich history and cultural traditions have helped to prevent the country from becoming a safe haven for international terrorism. The long-term terrorist threat in Somalia, however, can only be addressed through the establishment of a functioning central government Videos: Jihad Camp in Somalia; English-Speaking Recruits WWW.KATAAIB.NET IN VANCOUVER WA, PRIVATE INVESTIGATOR BILL WARNER... Most of the Terrorist are from Hawiye tribe (al-shabaab) The leadership is mostly sub-clans of Hawiye (Habar Gidir clan) With The Exception Of OGADEN CLAN http://www.youtube.com/watch?v=dB2mnoXLoec&feature=related (ONLF )own hassan turki(http://en.wikipedia.org/wiki/Hasan_Hersi) and Abu Mansur a foot soldier from al-Qaeda any talks with Al-Shabab which is opposed to both the TFG and the Union of Islamic Courts. most of Mostly Hawiye Insurgents are from Somali clan of ,Habar Gidir group (itself a Hawiye subclan). Hawiye subclan).