Yemenis in Guantanamo set to be released within three months 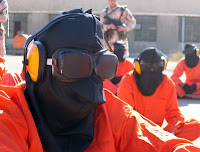 The Yemeni President Ali Abdullah Saleh said Saturday that a total of 94 Yemeni Guantanamo detainees will be released to Yemen within three months. He said Yemen had refused an offer from the former US administration for the release of the Yemeni men to Saudi Arabia for rehabilitation. "We refused the offer to release the Yemenis to Saudi Arabia for rehabilitation, and we told them we would establish our own centre for rehabilitating them and helping to rid the country of extremism and violence," said President Saleh in an annual conference for security leaders held in Sana'a Saturday. "Now, within 60-90 days, 94 Yemeni detainees will be here among us," he said Late last week, the Yemeni government announced it has begun to establish a special centre for receiving, re-training and reintegrating its citizens from the Guantanamo detention center after they are released. On his part, the American ambassador to Sana'a Stephen Seche said that his government was in “constant conversation” with Yemeni authorities concerning the Guantanamo issue, as many of the detainees are Yemeni citizens. More than 100 of the 254 remaining detainees in Guantanamo are Yemenis. “We are going to find a way to relocate them at some point. Certainly we would like to be able to bring them back to Yemen and have them integrate themselves back into their own society with their families and make a future for themselves here,” the ambassador Seche said in statements published Saturday by the America.gov website. more..http://www.yobserver.com/front-page/10015648.html
Posted by Siad barre at 5:12 AM