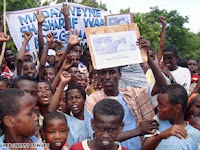 CNN) -- Moderate Islamist leader Sheikh Sharif Sheekh Ahmed was sworn in as Somalia's new president Saturday after he was voted in by the country's parliament, a Somali journalist said.Journalist Omar Faruk Osman told CNN that Sheikh Sharif was sworn in about 11 a.m. (3 a.m. ET) in Djibouti, northwest of Somalia.The vote and swearing-in took place in Djibouti because the international community wanted to be present to observe the voting process and could not do so in Somalia for safety reasons.The Djibouti location had been chosen before radical Islamic fighters took over the Somali parliament building and the presidential palace this week.
Sheikh Sharif won a comfortable majority of the votes in a second round of voting early Saturday after one of his main rivals, Nur Hassan Hussein Nur Adde, the former prime minister of Somalia, withdrew from the race.Nearly 300 members of the nearly 500-member Somali parliament voted in favor of Sheikh Sharif.The new president was a founding member of the Union of Islamic Courts, which Ethiopia ousted from Somalia in December 2006 after the the group took over Mogadishu that year.more..http://www.cnn.com/2009/WORLD/africa/01/31/somalia.election.president/index.html?eref=rss_latest
Posted by Unknown at 11:14 PM