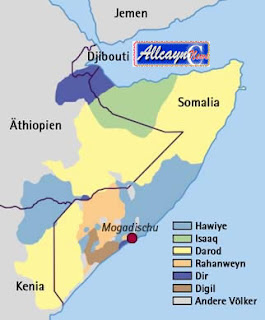 The Nationalists:
The wave of nationalism that had engulfed the Somali population during the 1977-78 Ogaden war has now somewhat diminished. Despondency and the inability to regain the Western Somalia have, to some extent, extinguished the flame of pan-Somalism. Vicious clan rivalries paved the way towards the speedy erosion of unity and peace. Tribalism, cronyism, nepotism and all sorts of ill-feelings engendered by the poor performance of the Somali regime soon brought about the implosion of the government. Now decades later, that flame has been rekindled. The notion of a Greater Somalia that had remained dormant over the years has now been resuscitated back to life with the Ethiopian invasion of Somalia in 2006. As in the Ogaden war, almost three decades earlier, hundreds of thousands of Somalis contributed men and money in order to expel the invading forces. Sentiments ran high in the capital city and even many estranged Somali youth in the Diaspora returned home to take part in the battle for the liberation of Somalia.
The nationalists harbour a profound dislike for the Ethiopian government because of the latter’s repeated incursions into the Somali territory. The nationalists wish to wage war against the Ethiopians, provided that they have the means and a leader strong enough to muster popular support, in order to liberate the Western regions of Somalia. But despite their vehemence and zeal, the young Nationalists often lack the political profundity and the abstruse knowledge that defines the dynamics of the centuries-old Somali-Ethiopian conflict. In addition to that, they are not yet fully prepared to sacrifice their lives for the cause, or a handful of them are – and this is the differentiating factor between them and the Islamists. And where the Nationalists are propelled by patriotic sentiments, the Islamists march forth with a spiritual strength and are obliged by a religious conviction – that the Islamic Caliphate must dominate the land.
The Islamists:


The Islamists, Al-Shabab in particular, pose one of the greatest dangers to the existence of Ethiopia’s current geographical boundaries. Like the Nationalists, the Islamists, whose underlying religious ideology dictates that the world is divided only into Land of Belief and Land of Disbelief, do not recognise the invisible geographical boundaries that separate Somalia from Ethiopia or Kenya for that matter. But while the Nationalists desire to recapture their ‘rightful’ territory, the Islamists objective is to conquer far beyond the Ethiopian highlands. With their goal of Islam’s supremacy and global domination, Al-Shabab, much like their ideological relatives in the mountains of Afghanistan, Iraq or the Arabian Peninsula, are pursuing the establishment of Shariah Law on earth.

Since the establishment of the Islamic Courts Union (ICU) in 2006, the Ethiopian engagement with Somalia took a sinister turn. Pockets of Ethiopian troops were quickly dotted around the border regions and as the Islamists captured almost the entire Southern Somalia with little effort, the Ethiopian government began beating the drums of war. Recognizing the implications of an Islamic State as its neighbour, Ethiopia invaded Somalia in December 2006, in what it called a ‘self-defensive counter-attack’ measure to curb the Islamist expansion. Within a short period of time, the Ethiopian troops conquered the capital of Somalia as the ICU forces purposefully pulled out from the city, but soon realised that holding Mogadishu was not as effortless as they had imagined.
With the dissolution of the core Islamists in the ICU make-up and its members dispersed into the towns and cities, a small group of soldiers, mainly youth that formed the military wing of the ICU, remained behind and staged a deadly guerrilla warfare that rendered the Ethiopian troops restless. The little-known youth, went by the name Al-Shabab and followed the fundamental tenets of Islam and pledged to rule, though it was thought to be an ambitious dream at the time, the entire Somali regions according to these fundamental teachings. And unlike the Nationalists, the Islamists are willing to shed every drop of blood for the sustenance and supremacy of their ideology – believing that for the branches of Islam to attain global domination, its roots must first be watered with blood.
Today, nearly four years later, the youth are a force to contend and they control almost the entire Southern and Central Somalia according to Shariah Law. Ethiopia’s haughty effrontery of yesterday has now given way to a grave concern that threatens to shake the pillars of the old empire. It is a fight for survival now, for the Ethiopian regime is certain that if not stopped, these youth would surely reach the gates of Addis Ababa one day and conquer not only the Ogaden but also the entire Shoa and Adal Kingdoms.
Thus the border regions of Gedo, Galguduud, Hiiran and Bakool have particularly seen intense skirmishes between the Islamists and the Ethiopians; and only a few days ago the Islamists executed two Ethiopian spies in Mogadishu. It will a very long time before the battle is concluded or before we see the Horn of Africa free of the geographical/ethnic disputes that revolve around the colonial borders sketched by the Europeans. In the mean time, however, the battle rages on, and as long as Ethiopia can find a collaborating Abdullahi Yusuf or a docile Sheikh Sharif to hinder the popular Somali irredentism, it has achieved its goal of dismembering Somalia, thereby putting an end to the hopes of Somalia’s stability and/or the political amalgamation of the two states.
Ethiopia fears that a strong Somali state or an Islamist- run Somalia would greatly endanger its territory and add to its existing security woes. But while the Ethiopian ambition seems to revolve largely around preventing this from happening, the prevailing opinion among the general Somali population of today still remains no different than that pioneered by their fore-fathers: ‘Western Somalia stops only where the camel stops!’