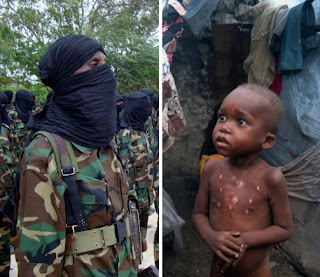 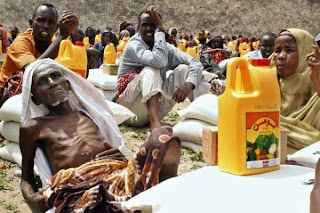 As the people of Somalia struggle against the worst famine the world has seen in a generation, the global response to their suffering has been deplorable (click here for slideshow).Somalia is facing what is now considered the world's worst hunger crisis in over two decades - a famine that has put 11 million people across the region at risk of starvation.The most devastating drought to hit eastern Africa and the horn in 60 years, combined with rising food prices, has driven the child malnutrition rate to 55% while the number of infant deaths has reached six a day, according to the United Nations Children’s Fund (UNICEF).Barbara Jackson of CARE International said the situation in Somalia is the most catastrophic she's ever seen in her 22-years of field experience. Jackson also pleaded to the world community on behalf of those victimized by the famine:"The level of suffering they have endured is beyond our imagination and they require immediate assistance. Everyone I met had the same message, 'Please tell the world for us, that we need help, and that we need it now. We cannot last much longer'."The global response to the emergency has been extremely disappointing to many humanitarians. An appeal late last year for $535 million to address the growing food shortage is still more than $250 million short.But reaching this requirement will simply satisfy the immediate need and not address the underlying causes of the crisis. Until that happens, Somalia's long-term prognosis looks frightening.Continue reading on Examiner.com Scenes from Somalia: Famine, drought and terror - National Geopolitics

The Kenyan government is under pressure from the U.S. and others to open up an additional camp, Ifo-2, to accommodate some of the recent influx of Somalis. But Kenya argues that the refugees would be best served being assisted back home, on the Somali side of the border.It also points out that Kenyan nomadic herders and farmers across the arid and semi-arid north of the country are suffering from the same drought as the Somalis, and that resources and pastureland are limited.Kenya says it fears that members of the al-Qaida-linked al-Shabab may surreptitiously cross into Kenya with the refugees, and spread terror on that side of the frontier.
Challenges Delivering Aid To Somalia


Responding to the famine in Somalia will be a challenge for donor nations. U.S. officials say the trouble is that al-Shabaab, an Islamist group on a U.S. terrorism blacklist, controls part of Somalia, making it too dangerous for aid workers. But some aid groups say U.S. policy in the region is also preventing them from doing the kind of lifesaving work they want to do. Joel Charny of InterAction, which represents 190 humanitarian organizations, says U.S. sanctions on al-Shabaab make matters more complicated, and the U.S. government just doesn't trust aid groups enough to make the right decisions. "Al-Shabaab has made life very difficult for our community in south-central, but it is not across the board and it is something we can negotiate on a case-by-case basis. And that's all we are really asking to do," Charny says. Listen to the full story from NPR's Michele Kelemen
Posted by Siad barre at 6:20 AM