Our latest segment :The campaign to legitimize the secession of Northwest Somalia, which was one-sidedly named as "Somaliland" by few self-interest groups belonging to one single clan, who cleverly manipulated and disorientated some sectors of their people, particular those with the least education in a bid to further their ambitions of becoming "big fish in a small bond" had puzzled the minds of Somali people and many experts and observers on Somali issues. The illusion of this divisive force is to create a clan-based state in the 21st century, where countries of mutual or economic interests are uniting and world is becoming a global village.

The international community is warned of the dangers of accepting clan-based statehoods in this volatile region or continent. If these clan-based secessionists are granted statehood, it will set an unprecedented step towards the integration of the countries in the Horn and many others in Africa, Asia and even Europe. Multiethnic countries such as Ethiopia, Eritrea, Kenya, South Africa and Nigeria may be immediately affected. It may lead to the declaration of independence by sub-clans and village states may be reintroduced, taking the world back into Aristotle's time.

The consequences of springing clan states in today's dangerous world also carry the danger of these poor clan states becoming safe havens to drug barons, international smugglers or even terrorists. A situation like this will be unable to be monitored or controlled as hundreds of clan based village states sell whatever they can cheaply in order to survive. Therefore, the international community has obligations to safeguard the interests of all the peoples and should not allow the birth of clan-state in Somalia or anywhere else in the world in order to prevent and unprecedented chaos and lost of world law and order.

As far as southern Somalia is concerned, the people who are destroying the region are so-call Somalilanders who want clan statehood to gain international recognition. There has been no time for political settlement, rehabilitation or reconstruction in south Somalia and the population has scattered around the world or been killed. Most of them do not know where their loved ones are and whether they are still living or dead. They live in fear under a heavy Al-Shabaab military presence, led by terrorist Ahmad Abdi Godane, also known as terrorist Moktar Ali Zubeyr Godane, the emir of Al-Shabaab from Somaliland. Ahmad Abdi Oud Mohamud Godane, or “Abu-Zubeyr,” was born in Hargeisa, the capital of north Somalia on July 10, 1977. He is from an Arab sub-clan, the Isaaq clan in northern Somalia. He had received a scholarship in Pakistan funded by saudi blind millionaire, and now funded by Dhabshiil Money Transfer Company and Isaaq clan leaders as their candidate to represent the secessionist agenda/interests, moreover Dahabshiil had been paying millions of dollars to sum warlords in Mogadishu to continue the chaos and tarnish the image of the country's capital as one dangerous one. The secessionists have been also busy of destabilizing Mogadishu and the south, believing that the longer Mogadishu stays in chaos and anarchy the better chance they have to get international recognition and they are very determined to keep Mogadishu busy and burning.
In addition, the biggest Al-Shabaab ideological center in Somalia is the northern town of Burao, headed by a cleric called Sheikh Ali Warsame, who facilitates the movement of funds, weaponry and recruits from the Isaaq clan. Also, Sheikh Ali Warsame is the grand spiritual leader of all Al-Shabaab. This idea of religious extremism is actually foreign to south Somalia, and is imposed on the people of the region. The idea of Al-Shabaab is originally the creation of the secessionists and has been transported to southern Somalia to serve and help their secession agenda and the destruction of Somalia.
Al-Shabaab is funded and militarily armed by one-clan Somaliland, a secessionist faction. It was an open secret that secessionist Isaaq clan called itself Somaliland engaged in the support of Mogadishu warlords for the purpose of keeping southern Somalia in a chaotic situation and as a result seek the sympathy of the international community for themselves.
The secessionist catch-phrase continued to be: Look at what is happening in the southern part of the country and how great we are doing; we should be rewarded with recognition and secession from Somalia. Basically, their strategy is to keep up the argument that says, the southern Somalis are barbaric and we the secessionists are civilized, have peace, so please give us clan-statehood recognition.
However, they should know better in that no one can easily fool the united Somali people, and more so the international community with its fast tools, resources, and intelligence. For example, Dhabshiil Money Transfer Company CEO Abdirashid Mohammad Said Duale has promised $2 million for anyone who kills the great Somali singer Ms. Sado Ali Warsame, who has been singing for unity of Somalia. Therefore, it’s quite strange enough, when the financial and material aid granted to the secessionists by the Western nations is channeled to A-Shabaab to keep them in their business. It’s more strange when the perpetrators (here the secessionists) claim to be the nice guys.
How many times do we hear them make this statement? As soon as, we are granted recognition we will solve the mess in the south, because, we know how to do it. We have our cards in order, the means, the knowhow, and the influence. But when they are confronted with, ‘why don’t you solve it now?’ they would say, not now, first, we should be recognized as a sovereign clan-state called Somaliland.
Unfortunately, in essence, southern Somalia is being held hostage by the international terrorism, secessionists and their strong terrorist ally Al-Shabaab, because the two groups are against the internationally recognized Somalia Transitional Federal Government, peace and stability albeit for different reasons. Both of them are not prepared for negotiations, compromise and settlement to create a win-win situation for all. 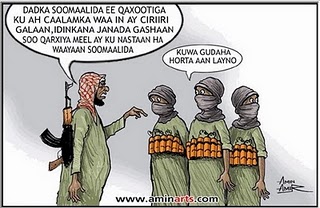 US to build ties with breakaway Secessionist Somali republics : The misguided and dangerous obama policy