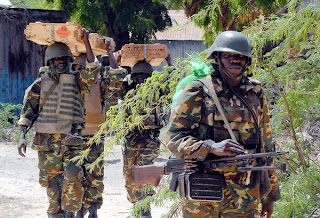 African Union peacekeepers from the Burundi contigent take up positions in Mogadishu last month in a battle in which they, alongside Somalia's government forces, managed to seize a district from the control of the Islamic militant group Shabab. (Mustafa Abdi, AFP/Getty Images / July 17, 2011)
Al Qaeda's powerful branch in Yemen has provided weapons, fighters and training with explosives over the last year to a militant Islamic group battling for power in Somalia, according to newly developed American intelligence, raising concerns of a widening alliance of terrorist groups.
Leaders of Al Qaeda in the Arabian Peninsula in Yemen also have urged members of the hard-line Shabab militia to attack targets outside Africa for the first time, said U.S. officials who were briefed on the intelligence.
The information, they said, comes in part from a Somali militant who was captured en route from Yemen to Somalia and interrogated aboard a U.S. warship before being arraigned in New York on terrorism charges this month. Further intelligence was gleaned from detailed digital files found at Osama bin Laden's hide-out in Pakistan after he was killed in May.
U.S. counter-terrorism officials, speaking on condition of anonymity in discussing intelligence matters, say text messages found on portable flash drives at the compound where Bin Laden was killed establish that he had sought to strengthen operational ties between Al Qaeda and the Shabab.
The heads of Al Qaeda in the Arabian Peninsula in Yemen, or AQAP, acted at times as Bin Laden's go-betweens to the Somali fighters. Among those who tried to forge the alliance was Nasir Wahayshi, an AQAP leader who previously operated as Bin Laden's personal secretary, said a former U.S. intelligence official who was briefed on the matter.
"There was a lot of traffic" about Somalia in the Bin Laden house, the former official said. Some of the thumb drives were smuggled out of Somalia and through Yemen before couriers hand-delivered them to Bin Laden in the Pakistani city of Abbottabad, the ex-official said.
The CIA gained other information when Somali authorities allowed them to interview Shabab militants imprisoned in Mogadishu, the Somali capital, U.S. officials said. The CIA asked about the militants' ability to launch attacks outside Somalia as well as the group's command structure.
Discussing the threat with reporters at the Pentagon recently, Adm. Michael G. Mullen, chairman of the Joint Chiefs of Staff, said that Al Qaeda operatives in Yemen are "trying hard to kill us" and "there is a growing cell [in Somalia] and a growing connection to Al Qaeda that we are all concerned about."
In a sign of the expanding front, U.S. drone aircraft fired missiles at suspected militants in Yemen in May, and in Somalia in June. They were the first known U.S. military attacks in Yemen since 2002 and in Somalia since 2009.
Other messages about the Shabab circulated among Bin Laden, his chief deputy and now-successor Ayman Zawahiri, and Atiyah Abdul Rahman, a Libyan who acted as Al Qaeda's chief operating officer, said the former U.S. official. Zawahiri's location is unknown, and Abdul Rahman was reportedly killed in October in Pakistan although American intelligence officials believe he is still alive.
The three militant leaders sought to persuade the Shabab to shift its focus away from Somalia to directly target the United States and its allies, the messages showed. The Al Qaeda leaders also pushed the local group to change its name to Al Qaeda in East Africa.
In January, Bin Laden and his aides agreed to elevate the Shabab to the same status as Al Qaeda franchises based in Yemen, Iraq and North Africa, said the former U.S. official. But the Shabab's leaders did not adopt the Al Qaeda brand name, fearing it would fracture the group and draw more attention from Western intelligence groups.
Contacts between Yemeni and Somali militants have taken place in the past. The Shabab has bought weapons and explosives from Al Qaeda contacts in Yemen using money from piracy and kidnap-for-ransom schemes, said a U.S. counter-terrorism official.
Until recently, Shabab insurgents have focused on trying to overthrow the United Nations-backed transitional government in Mogadishu. However, the group claimed credit for two suicide bombings in Uganda's capital, Kampala, last summer that killed at least 74 people, including one American, its only known attack on foreign soil. Uganda's government has contributed troops to an African Union peacekeeping force in Somalia.
"We are starting to see a conflation of jihadi conflict zones," said Frank Cilluffo, director of the Homeland Security Policy Institute at George Washington University. "Yemen and Somalia are moving together."
There is an "active working relationship" between Al Qaeda's groups in Yemen and Somalia, said Seth Jones, a senior political scientist at Rand Corp., a nonprofit research institution. "The two groups are attempting to coordinate actions between the Arabian Peninsula and East Africa."
The New York court case this month drew public notice to the Shabab's links to AQAP. After an alleged Shabab commander, Ahmed Abdulkadir Warsame, was indicted on terrorism charges, White House officials disclosed that U.S. forces had captured Warsame in the Gulf of Aden in April and interrogated him for two months aboard a U.S. Navy ship.
Warsame was a "key interlocutor" between Shabab and AQAP and "of course had ties and a relationship" with U.S.-born radical cleric Anwar Awlaki, an alleged terrorist planner and recruiter who is believed to be hiding in Yemen, a U.S. official said.
Al Qaeda operatives in Yemen were behind a failed attempt to mail bombs aboard cargo planes headed to Chicago in October 2010, as well as an unsuccessful effort to detonate a bomb on a Detroit-bound plane on Christmas Day 2009. LA TIMES
Posted by Siad barre at 10:45 PM