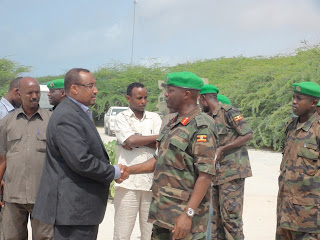 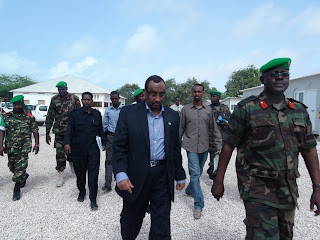 African Union peacekeeping mission in Somalia (AMISOM) has donated vehicles on behalf of the African Union to the Transitional Federal Government as part of its ongoing mission to stabilise Somalia.AMISOM Commander, Major General Nathan Mugisha, on Sunday handed over two Land Rovers, one Toyota Pick-up and three Yamaha motorcycles to TFG Prime Minister, Dr Abdiweli Mohamed Ali at Mogadishu Airport . The vehicles will be used by Somalia’s Ministry of Agriculture, Livestock, Forestry and Range to assist with disease control and food security programmes.In a hand over ceremony held in Mogadishu Airport, Maj. Gen. Mugisha said that the vehicles were donated by the African Union to the Transitional Federal Government saying that their contribution will help the TFG reach out to farmers and provide extension services at such a critical time.AMISOM says the donation is in line with its mandate in Somalia that seeks to enhance the capacity of TFG to deliver services to its people.Civil Military Cooperation Officer, Lt. Col. Katwekyeire Kamurari, said the supplies will go a long way in helping the Ministry of Agriculture to reach out to farmers at such critical time.After the handover ceremony, the Prime Minister visited AMISOM Field Hospital to meet Somali patients being treated by AMISOM doctors. 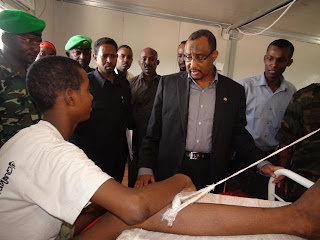 AMISOM: We are defending Somalis from Al shabaab

Mogadishu, 22 July, 2011
The Transitional Federal Government of Somalia has condemned the reinstatement by extremist insurgents of a ban on international humanitarian agencies at a time when the country is suffering catastrophic famine.
"The extremists are literally and deliberately starving the people to death," said Prime Minister Dr Abdiweli Mohamed Ali, after reports emerged that the rebels are also stopping people from leaving areas under their control in search of food. He appealed to the world to come to the aid of Somalia and to help free her people from both the famine and the inhumanity of the insurgents."The international community must come to our aid by giving us, not just food, but also the means to rid Somalia of these callous terrorists who have no regard for the interest of the Somali people," he said."It is the insurgency itself that is the root cause of the famine," he said, adding that the government, with the support of the African Union Mission in Somalia (AMISOM), was doing all it could to tackle the immediate crisis as well as defeat the extremists.
"With the help of AMISOM, we have established a relatively secure zone in the southern half of Mogadishu where humanitarian agencies can deliver emergency assistance to the people," he said. "With more resources and troops, we could expand this to cover the whole country. We must do this if we are to save the lives of millions."The UN estimates that more than 3.5 million Somalis, the vast majority of them in insurgent-held areas, may starve to death unless emergency aid reaches them in the next few weeks.
- END -
Communication Director, office of the PM
Mobile: +252-615536608
+252-6-2536608
Mogadishu, Somalia
VIA- Abdirahman WarsamreeTerror Free Somalia 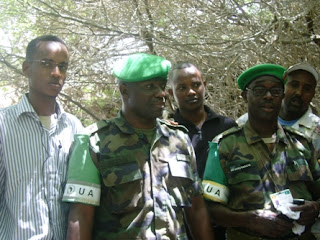