The US Treasury Department announced on Friday that it is imposing financial sanctions on a Kenyan the leader of a mosque in Nairobi's Eastleigh estate. Hassan Mahat Omar &Omar Hammami, an American citizen known as Abu Mansur al-Amriki.(OFAC Takes Aim at Al-Shabaab) 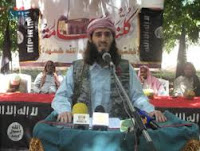 The U.S. Department of the Treasury today designated two key al-Shabaab figures, Omar Hammami and Hassan Mahat Omar pursuant to Executive Order (E.O.) 13536, which targets for sanctions individuals and entities engaging in acts that directly or indirectly threaten the peace, security or stability of Somalia.
As a result of today’s action, U.S. persons are prohibited from engaging in any transactions with today’s designees and any assets they have under U.S. jurisdiction are frozen.

As one of al-Shabaab’s key figures, Hammami serves as a military tactician, recruitment strategist and financial manager for al-Shabaab. Hammami has commanded guerilla forces in combat, organized attacks and plotted strategy with al-Qa’ida. He was also involved in organizing a suicide bombing attack carried out by a Somali-American from Minnesota who traveled to Somalia to join al-Shabaab. That attack, and four others organized by Hammami and carried out in October 2008, killed more than 20 people.

In what appeared to be an attempt to increase recruiting among Somalis, including Somali émigrés in the United States, Hammami is also featured in an al-Shabaab video in which militia members are shown training and explicitly stating their allegiance to Usama bin Laden.

He was designated today for threatening the peace and stability of Somalia, and for acting for or on behalf of and providing material support to al-Shabaab, which was listed in the Annex to E.O. 13536.

Omar is a key figure in al-Shabaab’s efforts to recruit new members and raise funds. As an ideological leader of al-Shabaab, Omar exercises leadership and decision-making authority in al-Shabaab’s internal political and operational decisions.

Omar is a key leader of a mosque in the Eastleigh section of Nairobi, Kenya, which he, along with known al-Shabaab leaders, uses to raise funds, recruit and disseminate propaganda on behalf of al-Shabaab.