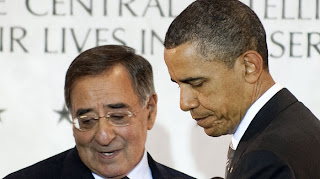 update on Somali detainee linked to Qaeda cleric: US. Obama administration shows how to treat a terrorist suspect
WASHINGTON - Senators pressed the Obama administration Wednesday on why a suspected Somali terrorist will be tried in a civilian court in New York and not the U.S. facility at Guantanamo Bay, Cuba.
In a letter to Defence Secretary Leon Panetta, 23 lawmakers questioned whether the administration's actions in the case of Ahmed Abdulkadir Warsame go against Congress' wishes that military commissions handle the trials of terrorism suspects.
The lawmakers, including Republican leaders, also asked Panetta whether the administration has a policy for handling high-profile suspects.
"The American people must be assured that terrorists are not brought into the United States for trial only to be released as a result of an acquittal, a short sentence, or some other action such as inability of the United States to deport an individual that allows the terrorist in the United States to remain here and be released into the general population," the lawmakers wrote.
The Associated Press obtained a copy of the letter.
The military captured Warsame on April 19, and then put him aboard a Navy warship, where he was interrogated at sea by intelligence officials, senior administration officials said last week.
Warsame provided what officials said was important intelligence about al-Qaida in Yemen and its relationship with al-Shabab militants in Somalia. The two groups have been known to have ties, but the extent of that relationship has remained unclear.
The FBI later stepped in and began the interrogation from scratch, in a way that could be used in court. After the FBI read Warsame his Miranda rights, which include the right to remain silent and speak with an attorney, he kept talking for days. He was indicted on federal charges in New York last week.
The senators cited recent congressional testimony from Vice Adm. William McRaven, who said decisions are made case by case on where to hold suspected terrorists captured by the U.S. military outside of Afghanistan and Iraq.
The lawmakers noted that former Defence Secretary Robert Gates and Adm. Mike Mullen, the Joint Chiefs of Staff chairman, also have told Congress that there is no single policy.
"We believe this is an intolerable situation," the senators wrote.They asked 11 questions, including whether Guantanamo was an option, whether detainees held at sea had been transferred to another country and whether the administration has a consistent policy.Among those signing the letter were Senate Minority Leader Mitch McConnell and top members of the Senate Armed Services Committee..Last week, McConnell accused the administration of undermining national security by bringing Warsame into the United States."The administration has purposefully imported a terrorist into the U.S. and is providing him all the rights of U.S. citizens in court," McConnell said. "This ideological rigidity being displayed by the administration is harming the national security of the United States of America."
The Associated Press
Posted by Unknown at 10:18 AM