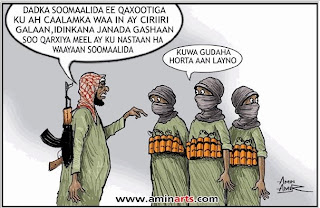 Terrorist break away tribal enclave of so called Somaliland is the breeding ground of Al Shabaab Movement in the south of Somalia. Ahmed Abdi Godane, the Al Shabaab leader and spiritual cleric, top Al Shabaab circle of influence and the backbone of the Al Shabaab militia numbering in the thousands, all hail from the break away Issak secessioinist enclave. 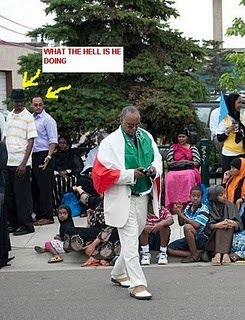 The Secessionist Administration of Somaliland supports the Al Shabaab with leadership, terrorist policy and guidlines, man power, finances and logistics. The secessionists divert the financial and material aid received from the western countries to Al Shabaab. The intention and end goal of the secessionists is to keep the southern part of Somalia hostage as long as possible and up untill the time their tribal enclave wins recognition as an independent country. The secessionists wrongly calculated that if the Somalia's south remains in chaos and under Al Shabaab's grip, the international community would eventually run out of patience with the south and grant recogntion to the secessionist tribal enclave.

However, the secessionists gravely overlook all the other factors impeding any prospect of recogntion granted to a very small one clan enclave, such as the North-West Region of Somalia aka Somaliland. The over-riding reason obstructing the Issak clan of secessionist Somaliland from winning a recognition is that other major tribes are inhabited in the North of Somalia (ex British Somaliland Protectorate), and these tribes, such as the DHULBAHANTE with more than 60% share of the territory , are strongly opposed to secession from the rest of Somalia. What happens, if say, the Sool, Sanaag, and Cayn Regions of Somalia (SSC), also located in the North of Somalia, campaign for secession and international recognition???

For you to put into perspective the extent of involvement of the secessionist Somaliland enclave into the operations of Al Shabaab in the southern part of Somalia, on the link below, please read more on the article published on the telegraph titled,

'At your service, Osama' - the African Bin Laden behind the Uganda bombings

Unfortunately, The title could mislead many into believing that Ahmed Abdi Godane the so called Somalilander, is the only African Bin Laden who is making the pledge ' At your service, Osama' where in fact, more correctly, it's all the Somaliland secessionists who are taking the pledge into their hearts, because all of them are behind the Al Shabaab leader Somalilander Mr. Godane who is in a mission to keep the south in shatters so that the Issak enclave gets recognition.

The international community is missing the point when it comes to how to deal with Al Shabaab Puzzle?

ow, is the time, considering what happened in Uganda, the international community and particularly the West wake up, opens its eyes, and understands the reality on the ground - The Al Shabaab comes from the secessionist enclave of Issak one clan so called Somaliland, so deal with them appropriately with an unambigious message which reads as,"you are one of many Somali tribes, who need to come together and put their house in order...forget about secession..." and Al Shabaab will vanish altogether, because no longer will be there any incentive for the secessionists to continue the madness in the south. Try this very simple cure.Read more on the telegraph at this link:  H\T
Watch the Daily jihadist  Propaganda from  SOMALILAND LIVE TV

I am a Somali man and I'm from the former British Somali colony of Somaliland. I would like the world to know that majority of the people in that part of the country do not want to be separated from the rest of the country except the pure clan-dominated party that wants to establish a government where they could be the majority and the decision maker, to harm and abuse the rest. It is true there is peace and development in so-called Somaliland, but let us not forget that peace came through the contribution of many citizens that do not want to be independent from the rest of Somalia. If the world recognises Somaliland, that would lead to civil war and instability of that part of the country that seems to be enjoying peace Somaliland is no longer
a collection of clans; I would say he is right because Somaliland is ruled and operated by one clan.

Learn the Truth!
Separatist regime in North-WesternSomalia convincingly continue to lure the international community by
selling true lies via enclave’s misguided media and through opportunistic international NGOs. The unwarranted propaganda campaign has taken its toll–even the most prominent media sources such as The Daily Telegraph and others carried stories pertaining to what they called ‘Somaliland’s credible election.  Indeed, those organizations have no physical presence on the ground, and have no idea about Somaliland’s tainted election. Unfortunately, international observers and fewer journalists who came to report on the facts have
no access to most constituents where the said election is to take place. They are bound to rely on Hargeisa’s area poll stations. And Hargeisa is where the separatists cohorts have their strength. In a desperate attempt to justify Somaliland’s illegitimate election, Somaliland’s Election Commission reported 1 million registered voters. Well, if that is the case, not to mention half of the north excluded, Somaliland all along claimed its population to number 5 million. What happened to the other 4 million citizens?  As misleading as the voting
process itself, the proponents of the enclave’s goal to secede from the rest of Somalia placed great emphasis on the illegitimate election. Attaining an international recognition for the enclave has led them to take direct orders from Addisababa regime. As part of the Meleze’s plan to farther dismember Somalia, Ethiopia
has established intelligence offices in Hargeisa. Ethiopians carry out secret operation in Hargeisa in a broad day light; hundreds of innocent Ogadenia citizens were either killed or arrested in the process; even the only port in Somaliland, Berbera is subleased to Addisababa.  In return the Meleze regime mires Somaliland die-hard SNM loyalists whilst consummating the remainder of Somalia. Definitely, Hargeisa serves as a staging ground for Ethiopia’s Wayaane operatives who carry out deadly missions within stateless Somalia.
In one of the missions, Ethiopian Secret Police abducted an elderly Ogaden women who escaped oppression and the assault of the Ethiopian Army in the Ogaden Region. And when the act was criticized by the Amnesty International, Somaliland officials openly admitted that the women was extradited to Ethiopia based on a bilateral relations between the two countries. The question is: when did Somaliland became sovereign state? Only sovereign states with treaties can extradite suspects to one another. Ethiopia also plays major role in silencing half of the Northern Somalia’s population, in perspective North Central Regions: Sanaag,Sool, Ayn and Haylaan. The people in those regions like many others in the North West and elsewhere in Somalia are pro-union and categorically oppose dismemberment of Somalia.  Smuggling ballot boxes into those regions was not successful–many of the boxes were confiscated and the militia that delivered the boxes are in Puntland’s custody.To end, all that inhumane acts and lies did not buy international recognizion for Somaliland in the past, and the election itself is thelast desperate attempt to mislead the international community.

he tribal entity sepretest Somaliland produces most  terrorist in Somalia