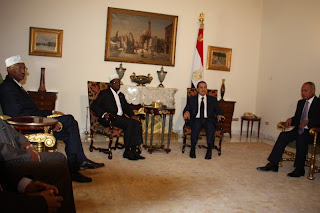 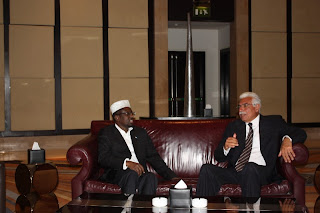 (TF.SF )Cairo Egypt, July 18, 2010The President of Somalia, Sharif Sheikh Ahmed, meets today with the President of Egypt Hosni Mubarak, Prime Minister of Egypt and will confer this evening with the Secretary General of the League of Arab States, Amr Moussa.
President Sharif came to Egypt to discuss with the leadership of this important African and Arab country about the security situation in Somalia and the importance of establishing robust and united international stand against those who are committed to do harm not only in Somalia but across the region and around the world. 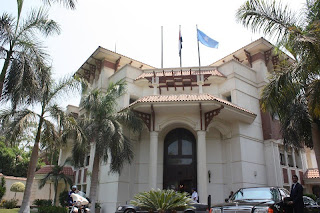 The Somali President is accompanied in this trip by the foreign and defense ministers as well as members of parliament and senior officials in the Presidency.
Posted by Siad barre at 5:25 PM