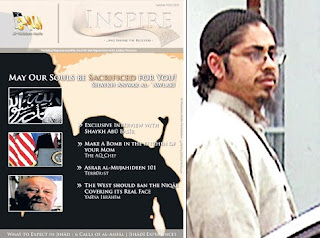 update From al-Qaeda, an English-language 'magazine' story
Long time readers know the very personal feud between myself and Samir Khan. He once publicly called upon Allah to kill me and terrorize my family. We have a whole archive dedicated to the former Charlotte, NC based eHadi (see "Inshallahshaheed" in the left column).Last week we reported that Sammy was behind the new al Qaeda magazine. Now the MSM is picking up on the meme. NY Daily officials see chilling similarities between a militant blog Samir Khan produced and the Internet-based magazine Inspire.Khan landed on intelligence radar in 2007, when he was 21, after posting an Osama Bin Laden screed to the blog he maintained from his parents' basement.Fast forward to last month, when Al Qaeda put out Inspire, with the message that U.S. military action in the Arab world must be avenged.The packaging spooked experts with its potential for recruiting Western youth. It also seemed familiar to those who track militants, like the Jawa Report blog. Read the rest For what it's worth, we've been going back and forth with Samir since 2005. When I learned that Samir had fled the country I was perterbed, to say the least. But now I'm at peace with the decision that some pencil necked bureaucrat let Khan board an airplane, even though he was the central node in al Qaeda's online English nexus. Now that he's officially working for al Qaeda and he's abroad that means that he finally fits the technical definition of a traitor. And that means Predator drones. Hey Sammy: keep an eye skyward. UPDATE: NPR confirms some details:Now intelligence sources tell NPR they think the magazine is more likely the handiwork of another American -- a young man named Samir Khan.

They also note Sammy went to Yemen to "study Arabic" and then "disappeared". I bet no one saw that coming....CNN also confirms, but their source is someone in law enforcement. Neither one, of course, sites Jawa or SOFIR. H|/T Rusty's from jawa
Posted by Siad barre at 6:36 PM