Why Pakistanis have been detained for Al Shabab's Uganda bombings 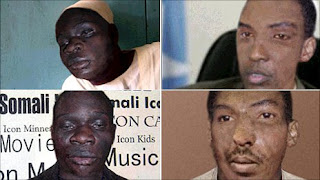 Several Pakistanis are among those detained in connection with Al Shabab's Uganda bombings during the World Cup final on July 11. The Al Qaeda-linked Somali group claimed responsibility for its first terrorist attack outside Somalia. 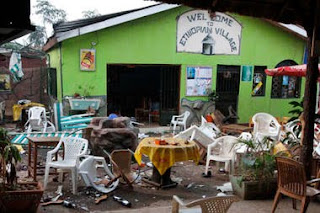 Damaged chairs and tables lie among the debris strewn outside the restaurant "Ethiopian Village" in Kampala, Uganda, July 12, after an explosion at the restaurant on July 11. Several Pakistanis have been detained in connection to the suicide bombings.
Kampala, Uganda A week after Al Shabab's Uganda bombings that killed 76 people watching the soccer World Cup final, Ugandan police released reconstructed pictures of two suspected suicide bombers and said that “more than 20” people have been detained in connection with the investigations, including several Pakistani nationals working in Uganda.Last week Sheikh Mukhtar Abdirahman Abu-Zubeyr, spiritual leader of Somalia's Al Qaeda-linked Islamist group, Al Shabab, reportedly claimed responsibility for the blasts in a recorded message. Mr. Abu-Zubeyr said that the attacks had been carried out by members of the Saleh Ali Saleh Nabhan martyr brigade, named after a suspected Islamist leader killed by the US in Somalia last year, in revenge for the indiscriminate shelling of Somali civilians by Ugandan peacekeepers in the country.
Ugandan police chief Kale Kayihura said in a press conference Sunday that there is now “very, very strong evidence,” including the unclaimed and unidentified remains of two men found at the blast sites, to suggest that the attacks had been carried out by suicide bombers.

Reconstructed images of suicide bombers
Investigators have reconstructed images of the suspected bombers from the unclaimed heads of the two men, one “definitely Somali looking” and the other a black African “with characteristics not typical of Somalis,” found at the sites, Mr. Kayihura said. The images have been released by Interpol in an international effort to identify the suspects.The Ugandan police are following up “several good leads” on the identity of the suspects, a source close to the investigation said Monday.
More than twenty people are currently in custody in connection with the investigations, the police said.
The Pakistani connection?

These include several Pakistani nationals detained Saturday after a “convergence” of information, including an e-mail sent to a local newspaper naming a Pakistani national in Kampala as a point-man for Al Shabab, led investigators to an address in the city, Kayihura said. The e-mail, purporting to be from Al Shabab spokesman Abdi Karim Abdulahi Yusuf, named the Pakistani as “country coordinator for all the Al Shabab mission [sic] in Uganda.” The address is listed as the Ugandan branch of a Pakistan-based interactive technology firm, on the firm's website. Kayihura said that people at that address had been on the radar of Ugandan security operatives prior to the e-mail being received. As of Monday, the Pakistani nationals remained in custody while Ugandan police cross-checked their records with other intelligence agencies and Interpol, a source close to the investigation said.With no one yet charged over the attacks, however, Kayihura played down the significance of the detentions made so far, saying that it was still “too early to talk about any suspects being linked to the blasts.”
Four Ethiopian nationals arrested last week as part of the investigations had been released, he said.

Ugandan officials have been quick to draw a link between Al Shabab and the Allied Democratic Forces, or ADF, a mainly Muslim Ugandan rebel force that has been battling the current Ugandan government from bases in the neighboring Democratic Republic of Congo off and on for over a decade. Police chief Kayihura said that although there was undoubtedly a “strong foreign element” in the planning, inspiration, coordination and support for the attacks, those responsible must have also used “a local network” inside Uganda. The Daily Monitor, a Ugandan newspaper, cited a high-level security source Monday as saying that Ethiopian intelligence had over the weekend passed on the name of a Somali national supposed to be the mastermind behind the attacks to Ugandan security.As the Ugandan authorities step up the efforts to find those responsible for the attacks, investigators from around the world have jetted in to assist the investigations.“Around 60” agents of the Federal Bureau of Investigation are currently in Uganda to work with local security forces on the bombings, says Joann Lockard, a spokeswoman for the United States Embassy in Kampala. Assistance is also being provided by Britain, Israel, and South Africa, police chief Kayihura said.
Posted by Unknown at 3:53 PM