US vows to help Uganda track down the terrorists, African Union boosts troop role in Somalia

President Yoweri Museveni has commended African Union (AU) member countries and others from outside the continent for supporting Uganda following the twin bombings in Kampala on Sunday 11th this month by the Somali terrorist group Al Shabaab in which over 76 people lost their lives. The victims were football fans that were watching the World Football Cup Kyadondo Rugby club in Lugogo and the Ethiopian Village Restaurant in Kabalagala. The President who was addressing African Heads of State and Government at the opening of the three-day 15th African Union Summit at Speke Resort Munyonyo informed the summit that many of the perpetrators of the barbaric act had been arrested. He, therefore, recommended to the summit meeting that the AU should not accept the arrogance of terrorists.
“Who are these people who can dare attack the AU flag? Who are they and whose interests are they representing and serving”? he asked adding that these terrorists can be defeated. He expressed gladness that the whole of Africa had condemned the act and called on the people of the continent to sweep out the terrorists from Africa. "Let them go back to Asia where I understand most of them come from," he said. 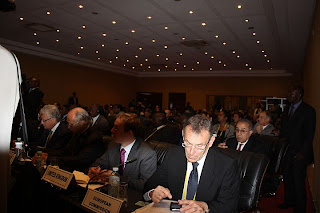 The summit is attended by over 25 Heads of State and government as well as observers and other guests from several countries including the President of Mexico, Mr. Felipe Calderon.
Meanwhile, President Barrack Obama of the United States of America has reiterated his government’s commitment to help Uganda track down perpetrators of the twin bombing in Kampala.
In his message read for him at the opening of the Summit, President Obama said his government had joined others in working to bring the perpetrators of the heinous act to justice. He said US recognized that the ending of the threat of Al-Shabaab to the world would take more than just law enforcement adding that this justified the move by his government to work closely with the AU to support African Union’s mission in Somalia. Mr. Obama hailed contributions that have been made by the Ugandan and Burundian forces in Somalia. He pledged total support to the peace keeping forces.
Welcoming guests to Uganda, President Museveni noted that the decision to hold the Summit in Kampala was an honour to the people of Uganda.
Mr. Museveni said that although the theme of the summit targeted mothers and children he, however, stressed the need to discuss it with the foundation of job creation, human resource development and infrastructure. He told the summit that Africa needs to address issues that form the major stimuli necessary to cause transitioning of the continent from 3rd to 1st world status.
He cited some of the stimuli as electricity, infrastructure and human resource development. He noted that high costs of electricity, its shortage, lack of human skills, among others, translate into high costs of doing business making a country not an attractive destination for doing business. He explained that depending on grants has also been dangerous as it is too little, very unreliable and too slow.
President Museveni added that much as we appreciate support from partner states, those elements needed to be addressed. He assured the summit that Uganda will become a middle income country by 2015 and said electricity generation will by then be 17,000 megawatts.
President Bingwa Mutharika of Malawi and current Chairman of the African Union condemned the recent bombings by terrorists in Kampala and called on all countries to condemn terrorism acts. "Terrorism does not advance humanity and it has no place in Africa," he said.
He appealed to AU member countries to increase their funding to enable Africa achieve the Millennium Development Goals (MDGs).He also called on AU member countries to seize every opportunity to end violence so that the people of Africa can live in peace and tranquility. He reported that the security situation has greatly improved in the Democratic Republic of the Congo but said Somalia needs special attention where AU should look for solutions to find lasting peace in that country. President Bingu wa Mutharika announced that the AU is to launch the women’s decade in October this year in order to strengthen the continental commitment to promoting gender equality and women empowerment.
Guest speaker, President Felipe Calderon of Mexico reported the people of Mexico denounce the attack two weeks ago in Kampala. He said Mexicans are in solidarity with the people of Uganda. He called on AU member states to double their efforts in combating climate change and also called for conservation of the environment.
Deputy Secretary General of the United Nations, Ms. Asha Rose Migiro, joined other speakers to condemn the ruthless attack on civilians in Kampala. She, however, called on the AU and the international community to strengthen their resolve in supporting the Transitional Government in Somalia. She also urged the people of Sudan to ensure that their referendum will be conducted peacefully. She called on AU member countries to prioritize the issue of Maternal and infant mortality. Other speakers included the new President of Nigeria, Mr. Jonathan Goodluck, the chairman of the AU Commission, Mr. Jean Ping and the representative of the Caribbean countries among others. -- End

27 July 2010 Last updated at 22:25 ET Help
African Union boosts troop role in Somalia
The African Union has pledged to send a further 2,000 soldiers to Somalia, and to introduce tougher rules of engagement, in the fight against Islamist militants.A group linked to al-Qaeda, al-Shabab, have claimed responsiblity for recent attacks in both Somalia and Uganda, where the African Union is holding its meeting.
Posted by Unknown at 5:57 PM